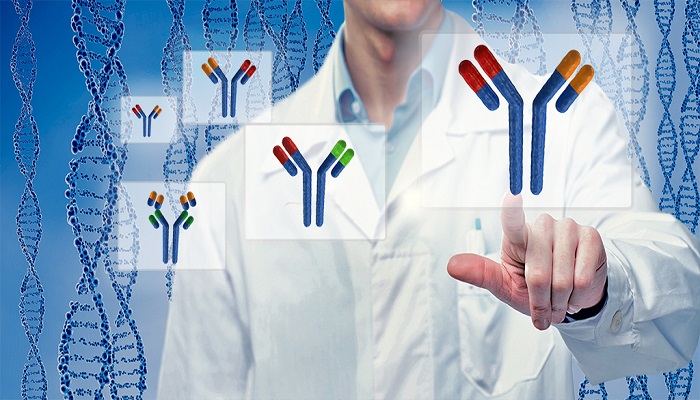 Antibodies are immunoglobin molecules produced by the B cells of adapted immune system that recognize particular antigen and are responsible for its removal from body. The antibody molecule unique and highly specific for the type of antigen to which it recognizes and binds.

There are two methods for antibody production:

Hybridoma cells lines were first created in 1975s, consisting of animal or human B cells fused with the myeloma cell line. This fusion resulted in production of large number of specific antibodies where B cell provided the specificity and myeloma provides the potential to divide and produce almost infinite number of antibody clones. Unfortunately, these antibodies show immune response when injected in humans. The whole technique is time taking and difficult to maintain as well.  Therefore,  these Abs are engineered to eliminate any possibility of generating immune response in humans.

The very first fully immunized monoclonal antibody was developed 25 years ago, via phage display and selection of antigen specific binder from lymphocyte cells. Researcher used transgenic organisms such as mice and rabbit for production of antibodies which contained human immunoglobin gene loci. But these were not ideal for therapeutic purposes for certain reasons, majorly because of immune response that they produce in human body. So, antibody engineering of these murine based antibodies was performed.

Phage particles are amplified and use a particular antigen, which helps in selection of certain immunoglobin gene. Infecting a bacterial colony by this phage results in antibody production outside the phage body which is even more advantageous.

Abs have vital importance for oncology treatment and more than 200 Abs have been approved for this purpose. The strategies are:

Abs have vital importance for oncology treatment and more than 200 Abs have been approved for this purpose. Their mechanism of action is target specific killing of cancerous cells. This happens by interactions of Fc region with compliment protein component C1q and Fcy receptor of Abs. This is ‘antibody mediated cell cytotoxicity’ (ADCC).  For most of the Abs, their affinity to bind to tumour cells, needs improvements. which is achieved by mutations in Fc region domain.

One method is glycosylation of Fc domain. FcyRs interactions with the carb groups and the composition of these glycan group significantly effect and improve the effector function of Abs.

This technique is useful for determining the interaction sites of Fc having its Fcy and C1q domains. Mutations are introduced at these sites namely K322A, L235A L2345E mutations. This improves the affinity of therapeutic Abs because these mutations eliminate binding of Fcy and C1q fragments. This binding otherwise covers the hinge region of Ab molecule.

IgG is a serum antibody with a usual half life time of 21 days due to its FcRn mediated recycling mechanism. Engineering of pH dependent Fc region can enhance the half life of IgG. This also improves the affinity of Ab at pH 6.0.

Researchers at Biopharma have observed mutations T250Q/M428L that approximately increase IgG half-life about two folds.  Other mutations may increase its half-life about four folds. This will reduce the need of repeated and frequent administration of serum IgG in immuno-compromised person.

Monoclonal antibodies, tagged with radioisotopes,  have wide application for detection of tumour cells. MRI detects radioisotops presence in cells.  when enters in body, their target is surface antigen of tumour cells. This is how doctors detect tumor at initial stages by these radio immunoglobins.

Antibodies have antigenic specificity and they recognize specific cell surface receptors on particular cell type. So they can target the drug to particular cells only. For example, in tumour cells treatment. The drug makes conjugatation with antibody molecule.  Moreover, this complex is non-immunogenic and biodegradable as well. So, it will release in targeted cell type on requirement.

Monoclonal antibodies have vital role when it comes to therapeutic purposes. Genetic engineering can further improve their specificity and affinity for batter targeting of antigen molecule. Treatment of certain infectious diseases and most importantly treatment of cancer is possible by using these engineered antibodies. Multiclonal antibodies are even better as they can recognize and target multiple antigens or multiple epitopes of same antigen with greater affinity. So antibody engineering is vital for therapeutic purposes.