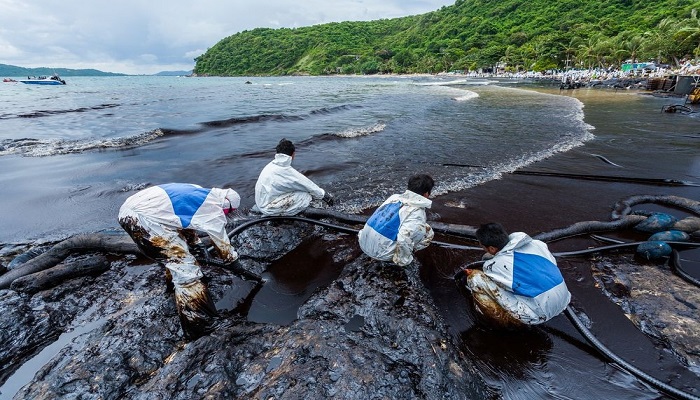 An oil spill is a form of pollution that involves the release of petroleum into the biosphere especially the waterways such as oceans, posing a huge threat to marine life. These spills may occur as a result of a physical harm to oil tankers that the ships carry or  the damage to huge offshore oil platforms or mismanagement of workers at drilling rigs and oil wells. Not only these but waste oil release and that of other petroleum products also constitute an oil spill. Bioremediation technique clears up these oil spills by application of microbes.

What harms does oil spillage cause?

When an oil spillage occurs it leads to the destruction of that ecosystem and its inhabitants. Oil clogs the gills of fishes, penetrates the fur of mammals and the plumage of birds which leads to reduction in their shield of insulation, making them sensitive to the fluctuations in temperature of their surroundings and lessening their buoyance in water.

Since these petroleum products are toxic and often contain hazardous carcinogenic volatile compounds such as PAH’s (polycyclic aromatic compounds) and VOC’s, (volatile organic compounds) an oil spill poses a leading factor of air pollution, contamination of drinking supplies and a fire hazard. This also affected the tourism in this area. Thus, it poses threat to social, economic, medical as well as environmental aspects of the society. The type of oil dispersed and the location of the spill highly influence the duration cleaning up of the spillage requires. Cleaning at times can even take up to months and years.

However, with the increase in scientific knowledge and researches, a new scientific strategy emerged known as bioremediation. Bioremediation is the utilization of specific microorganisms to eradicate a pollutant from their surrounding by metabolizing it, making it harmless for the environment. Several strains of bacteria, fungi, algae and plants are capable of breaking down harmful substances to nontoxic form. However cleaning of oil spills employs specific bacteria and archea that degrade different petroleum products. As compared to the manual and expensive technological methods previously used, bioremediation offers an inexpensive, easily applicable and environment friendly alternative to clearing of oil spills.

It was the deep water horizon oil spill into the Gulf of Mexico in 2010 that instigated the scientists to seek refuge in bioremediation. It involved leakage of over 4.2 million barrels of oil that endangered numerous marine species and ecosystems extending from tidal marshes to the floor of the deep ocean. The conventioanl methods weer filtering of drinking supplies, use of chemicals to the burning of spilled petroleum, multiple strategies to overcome this calamity.

Luckily before the spill some researchers had been working on role of microbes in clearing oil from spills. Thus, in depth study on this  notion researchers conducted and assessed bacterial DNA. It confirmed that certain marine bacteria were capable of regulating genetic pathways. This not only allows them to show resistance and survive but to also break oil particles and clear the mess.

Many bacteria capable of breaking down tough aromatic hydrocarbons were discovered such as Colwellia, Neptuniibacter and Alcanivorax. Study of their genetic material enabled scientists to amplify the functional capacities of these microbes. Since this incident bioremediation has gained importance and replaced many expensive and extensive oil spill cleaning techniques.

These methods involve physical devices and techniques to clean the oil spills. But there are certain limitations of these physical methods.

Cleaning of oil spills applies skimmers devices. They suck or scoop the oil in certain vessels or containers.

These are chemicals added to oil spills that break down the oil surface and aid its natural degradation.  The oil film breaks into small droplets that mix up in water to some extent. But there are issues regarding the chemical complexity of these dispersants as they can prove harmful for marine life. Also, there are chances that the chemical compounds may enter the food chain from the aquatic ecosystem.

The oil spills are degraded naturally although the process is slow. Sunlight, wind and water currents all contribute to disperse the oil layer into tiny droplets and its degradation.

Oil slicks can be burned down before they cause too much harm to marine life. Some of the oil is contained and later burned down to clean the oil spills.

The technique of bioremediation

Biodegradation is the natural process of oil spillage cleaning by the action of biological agents such as microbes etc. Bacteria and microbes break down the complex chemicals into simpler substances such as carbon dioxide and fatty acids etc. The resultant substances are easily dissolved in water bodies and not harmful for the marine life. This is how adding biological agents in water bodies can help in cleaning the oil spills.

Naturally there are certain microbial species present in water bodies that carry out biodegradation but the process can be enhanced by adding fertilizers or some essential nutrients in water. These nutritional substances such as nitrogenous or phosphoric compounds enhance the catalytic efficiency of microbes, to improve the process of biodegradation. For bioremediation, these techniques are applicable at he site of cleaning:

In this technique, the nutrients are added to the site of pollutant presence. The technique is same as fertilizing a lawn. As the aquatic environment is full of microbial species, capable of naturally degrading oil in small quantities. Moreover, they adapt to stresses of their natural environment. But the problem is that oil spills in large quantities. And due to insufficient amount of nutrients, the microbes are unable to degrade the petroleum products. For this reason nitrogen and phosphorus addition overcomes nutritional deficiency and increase their capability of petroleum degradation.

Seeding means the inoculation of microbe. In this technique naturally degrading microbes are added to the site of pollution so as to promote biodegradation. The inoculum formation happens:

This technique is useful when native species of the pollutant are less efficient to degrade the oil completely.  For this reason, those species are preferable  which are efficient in removing these pollutants.

In this technique, microbes are modified for certain characters. Using by which they can easily degrade petroleum pollutants. Such microbes are prepared and tested in laboratories before bringing them to natural environment.

Using this technique, non-degrading microbes are able to bio-remediate petroleum products or there is improvement in their degrading capability.

Following factors highly affect the process of bioremediation in cleaning of oil spills:

Bacteria, fungi, algae, and even plants carry out bioremdiation. Use of bacteria and fungi is usually preferable due to their relatively simpler nutritional requirements etc.

Following are some of the microbial genus that can be used:

Bioremediation technique aims to provide safe and clean aquatic environment. These may get contaminated by oil spills. However, the technique has certain advantages and limitation as well.