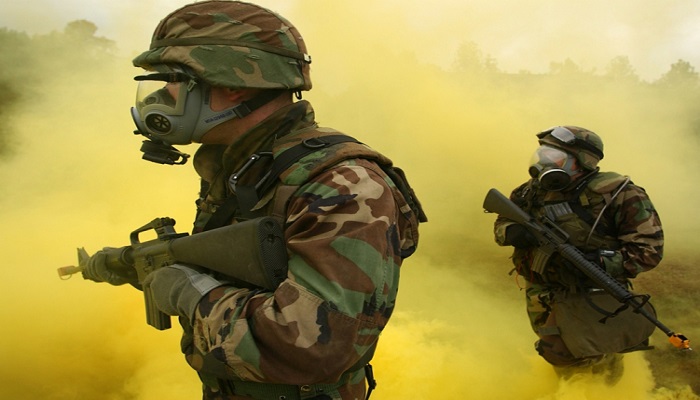 The chemical weapons are either some gases or liquid, formulated with the aim to inflict death of living. A chemical weapon is anything that injures, irritate or kill by mean of chemical activity. These are ‘the chemicals of mass destruction’. These are different from conventional weapons not only in their formulation but also due to different mode of harm they inflict.

Chemical weapons are liquid at room temperature and turn into gases upon release. The most lethal of these are nerve agents or nerve gases. These agents are composed of sulfur mustards components. Some examples are mustard gas and phosgene which were widely used in world war 1.

Gerhard Schrader, accidentally developed first chemical weapon (nerve agent) in 1934. This was actually tabun. But considering their use as biological war weapon, researchers made more effort to discover and produce more nerve agents.  Chemists developed approximately 2000 other nerve agents by the end of second world war. Three of the nerve agents are termed as classic nerve agents as they represent a specific class of chemicals. These are:

Although the first chemical weapons, the nerve gases, were accidentally prepared.  Yet they do have a role as the warfare weapons. The basic nerve gases of G series were all discovered or prepared during the First World War. After the production of tabun the Ministry of Chemical Warfare in Germany allowed the scientist to search for further chemical agents like tabun so that they could be used in warfare.

States with stockpiles of chemical weapons

During Iraq-Iran war, the former used mustard gases absent Kurdish. Halabja chemical attack on March 16, 1988, killed about 3000-5000 people including the civilians and army.

Japan also stored chemical war weapons form 1937-1945. These were mostly the mustard and lewisite gas mixture. However, in September 2010, Japan reported destruction of all stocks, as instructed by OPWC.

Libya used a massive amount of chemical weapons during Muammar Gaddafi regime. They have destroyed most of their stocks.  But, it still has stocks of about 11.25 tons of chemical weapons. The national transitional council of Libya after the regime of Muammar Qaddafi is cooperating with the OPCW to ensure the complete destruction of any type of lethal chemicals.

The use of chemical weapons is an inhuman act and is never justified. United States has destroyed about 90% of chemical weapon’s stocks. However, the complete destruction will take up to 2023. And this is possible if all the countries immediately stop the production and stockpiling these chemical weapons.