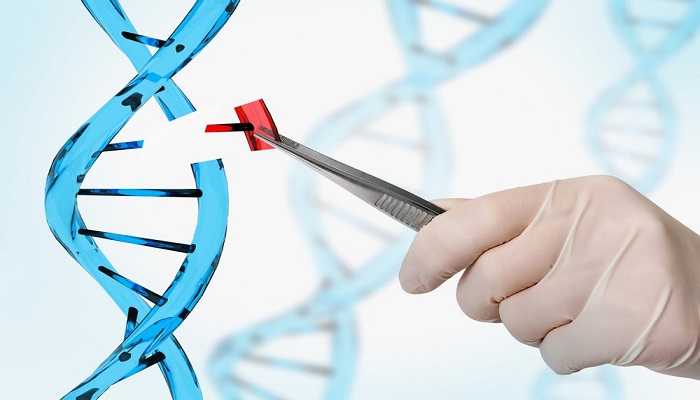 CRISPR technique is powerful tool for genome editing. It serves the purpose of genome alteration or modification. Cas9 protein is an enzyme which acts a molecular scissor for cutting and editing the genome sequence. The potential applications of CRISPR technique include correcting and modifying gene defects, treatment and prevention of disease to pass on to next generation. Moreover, in the field of agriculture the technique will help in crop production and more resistant and stable crops.

What is genome editing?

DNA is the hereditary material of living beings which passes on to next progeny. Any defects or mutations in sequence of DNA lead to some abnormality or disease. These defects can be improved if the researchers are able to edit genome. This includes the cutting of genome by molecular scissors, relapsing and altering its structure to remove the defects. Genome or gene editing will not only restore the normal gene function but also adds up to gene expression. For instance, some resistance providing gene in plants can be improved by genome editing to yield better quality crops. Researchers and biotechnologists are trying to develop more accurate, cheaper and stable gene editing tools.

This is recently developed gene editing tool. CRISPR is short form of Clustered Regularly Interspaced Short Palindromic Repeat and Cas9 Stands for CRISPR Associated Protein-9. This recent development has widely gained importance due to its precision, stability and cheap expenditure. The researches were in progress along with scientists vast studies and lab trails since 1987. The first trail of gene editing via CRISPR was performed in 2013 in Eukaryota cells.

This is a specialized sequence of DNA with two distinct characteristics: a nucleotide repeat sequence and spacers. Nucleotides are the building blocks of DNA. The repeated nucleotide sequence distribute throughout the CRISPR region. On the other hand, spacers are bits of DNA located in between these sequences.

CRISPR-Cas9 in genetic engineering, works similar to natural genome editor of bacterial cells. For the purpose, the researchers create a small fragment of RNA sequence that attaches itself with the target sequence of DNA in genome as well as with the Cas9 enzyme. Once the RNA has recognized the target sequence in genome, the Cas9 will cut down the target sequence. Now, cellular natural repair mechanism repairs the break/cut in genome sequence. The researchers manipulate, add or delete gene sequence during the repairing by replacing the natural sequence with customized or desired one. Although, the Cas9 is most frequently used, another enzyme cpf1 can also perform the enzymatic activity of Cas9.

In year 2007, Rodolphe Barrangou and team of researchers at Danisco successfully demonstrated CRISPR technique for the first time. They used bacterial strain streptococcus thermophilus. These bacteria are commonly present in yogurt and dairy products. After a viral attach on bacterial colony, the researchers observed new spacer regions in bacterial genome. These resembled the viral genome. The researcher’s then manipulated these spacer regions by taking them out and adding more viral DNA spacers in their place. Consequently, the bacteria acquired resistance against viral attack of that particular virus

When the spacers incorporate in the genome of bacteria, a part of CRISPR transcribes into CRISPR- RNA (crRNA) on second attack of virus particles. This nucleotide sequence of CRISPR acts as template to form a complementary sequence of single stranded RNA. Each crRNA sequence consists of a nucleotide as well as a spacer sequence. Cas9 protein is an enzyme in nature that cuts the gene sequence and it depend on crRNA for guidance. It cuts as double stranded-breaks in DNA.

Moreover, Cas9 does not cut just randomly. Instead short sequences named as PAMs Protospacer Adjacent Motifs serve as tags that guide Cas9 enzyme. Without their presence, enzyme will not cut.

In 2012, two research papers were published by the researchers which presented bacterial crisper-cas9 as gene editing tool.

‘‘Operationally, we designed a fragment of 20 base pairs that resembled the gene that we wanted to edit. Then RNA molecule complementary to this sequence was constructed while assuring that the sequence was unique in whole genome. Consequently, RNA guided Cas9 protein cut the gene sequence. Next, the cell repairs the double stranded cut and this edits the genome.’’ Remarks by Dr. Church

In 2013, researchers from laboratories of Church and Feng Zhang at Board Institute Of Massachusettes Institute Of Technology At Harvard edited genome sequences. They perform in vivo lab experiments on lab animals for treating the genome mutations in various genetic diseases. For instance, cystic fibrosis, fanconi anemia, cataracts. They published their findings in journal Nature Biotechnology. These experiments paved ways for clinical applications of disease treatment by gene editing tool.

On November, 2017, a team of researchers in supervision of M. Shibata and H.Nishimasu of Kanazawa University and University of Tokyo presented the CRISPR technique. They published their work in the Journal Nature Communications

On March 16, 2018, the researcher upgraded this technique. This enabled the simultaneous editing of  thousands of genes.

‘The public perception of CRISPR  focuses on its gene editing for the purpose of disease treatment. This is an exciting possibility but there is much more to it and this is just a small piece.’ Remarks by Neville Sanjana from NewYork Genome Center.

Previously, scientists used TALEN technique for gene editing. The CRISPR technique is four time efficient and cost effective compared to the previous one. However, this too has some limitations.

‘‘In my opinion, the major limitation of CRISPR technique is that this is not 100% efficient. The genome editing may vary.’’ Said Church at Live Science

Some studies show 50-80% of varying degree of gene editing.

Another limitation is off target effects. This causes DNA cutting at a site other than the desired one. Even if the system cuts on the target there are chances of not getting a precise editing. The researchers named this phenomenon as genome vandalism.

CRISPR technique is most recent advancement in field of science and technology. This has potential applications of genome editing that may serve the purpose for treating genetic disorders and to create better crop varieties and yield in future.