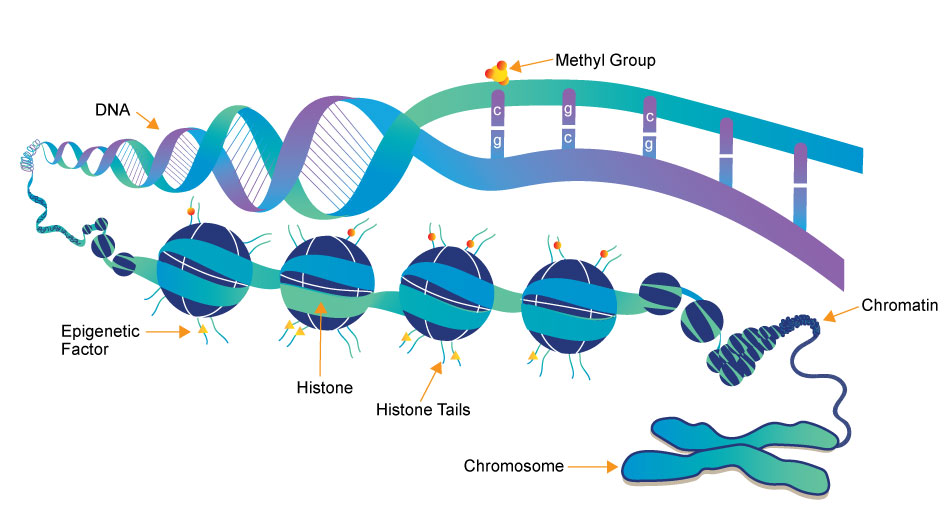 Epigenetic modifications are stable heritable traits or phenotypes other than those which are based on genomic sequences. There are dynamic event that modulate the gene expression. These are functionally relevant changes and modifications of genome that excludes modifications of nucleotide sequences.

For example, the mechanisms of histone modifications, DNA methylation, acetylation etc that effect the gene expression and its activity. Without the involvement of genomic modifications, these changes effect the expression and gene activity. Epigenetics are heritable to the next progeny, either the organism or the cell of organism, so they exist in many generations of cells. When they are inherited to the organism’s offspring, this phenomenon is termed as “Intergenerational Epigenetic Inheritance.”

Epigenetics analysis has become one of the powerful tools for broader range of plant species as they can be used to study and analyze variant phenotypes of tissue culture. For example, DNA methylation has an influential role in phenotype of plants based upon the remodeling of chromatin during the cell differentiation stages.

Epigenetic processes include gene silencing, paramutation, DNA methylation, and positional effects, histone modifications etc. The average rate of DNA damage is 60,000 times per day that can be repaired by cell but the site of damage may conserve epigentics. Double stranded breakdown of DNA may result in epigenetic gene silencing through methylation process and due to accumulation of repairing enzyme poly ADP ribose polymerase, MGMT, MLH1 enzymes enable the chromosomal remodeling that is also epigenetic process. Certain toxic chemicals such as benzene and styrene also contribute to activate epigenetic processes.

Epigenetic modifications effect the gene expression without the changes in gene sequences and these changes can be influenced by certain factors such as chemicals, drugs, environmental factors, aging and diet etc. DNA methylation is epigenetic modification that effects its expression. Similarly, histone modification includes binding of certain epigenetic factor to the histone tail in such a way that it affects the wrapping of DNA around it and it affects the availability of activated genes.

The CpG regions are rich in cytosine and guanine residues in DNA sequence. Methylation of these regions in particular pattern can influence the gene expression in a specific manner as some of them are highly methylated compared to other CpG regions. Each of them then influences gene expression in particular manner. Methylated cytosine can persist in germ line cell’s genome resulting in inheritance of epigentics to next progeny.

These are some major mechanisms of epigenetic modifications that control the expression of gene without changing its nucleotide sequence and induce certain phenotypic effects in plants.

One of the basic mechanisms of epigenetics that contribute in gene silencing, tumorigenesis, expression of endogenous genes, genomic imprinting and inactivation of X-chromosome. Methylation occurs more frequently in plants compared to eukryotic genomes probably because the plants require more efficient control of gene expression.

This methylation phenomenon can be of three types depending upon the type sequence context of cytosines. These are CG, CHH, CHG and occur in both monocots (rice) and decot(Arabidopsis) plants. The CG methylation level is highest then there is CHG and CHH is the least type of methylation mechanism in plants. Methylation of exons is frequent than introns

In plants methylation of exons occurs at high level compared to introns. Similarly, low incidence of methylation has been reported in promoter region of gene. Methyl group is added at 5’ end of gene sequence in its cytosine ring, creating 5-methylcytosine. Methyltransferases class of enzymes catalyze these modification reactions. when the replication of DNA occurs in cells, this methyltransferase enzyme maintain and recognize the unmethylated CpG nucleotide sequence and copy the methylation pattern as well. Thus, methylation pattern in copied in daughter cells from the parental cell.

Increased level of methylation may prove mutagenic as the repair of damage in 5-methylocytosin is less efficient than the unmethylated cytosine. Genome-wide DNA methylation has been observed in non-germline reproductive cells and the result may be silencing of transposon elements. Reprogramming and epigenetic variation of histone protein takes place in plants.

There is specific pattern of methylated CpG sequence that is responsible in controlling chromosomal stability and gene silencing. For instance, a hypermethylated sequence along with histone modifications results in condensation of chromatin to inactivated and inaccessible heterochromatin. Similarly, the promoter regions are mostly unmethylated so that they remain accessible to the transcription factors to regulate the gene expression and for the formation of protein product by these genes.

DNA wraps itself around the histone protein complexes. By controlling this wrapping and how tightly it occurs, the expression of genes can be modified. The amino terminal of histone protein undergo epigenetic modifications through methylation, acetylation, ubiquitination and phosphorylation etc. These modifications are post translational. These regulate the chromatin structure and function in such a way that it controls the transcription and translation of a particular gene.

Lysine residues at N-terminal of histone protein complex are either acetylated by the activity of enzyme histone acetyltransferase. Or the enzyme may deacetylate (removal of acetyl groups) histones.

Naturally, lysine residues have positive charges. Therefore, these can efficiently bind to negatively charged DNA for nucleosome condensation and chromatin formation making it inaccessible for transcription factors. Acetylation of lysine residues neutralize these positive charges thereby reduces the hitone and DNA interactions and affinity to bind and wrap tightly around it. So loosely condensed chromatin become accessible to transcription factors for active gene expression. This is why; histone hyperacetylation is more favorable epigenetic modification for active gene expression in plant cell genome.

Epigenetic modifications including methylation and acetylation phenomenon are also termed as covalent modifications.

The product of gene transcribed gene may influence and maintain the gene expression directly or indirectly. For instance, the transcription factor Hnf4 enhances the gene expression. During cell differentiation and developmental stages, methyltransferases enzymes play their role in modifications of chromatin. Epigenetic changes generate various spliced forms of RNA. The genes sometimes turn on and off by mechanism of signal transduction.

These are non-coding RNAs ranging from 17-26 nucleotides in size. They mainly act in posttranslational epigenetic modifications by controlling sequence specific transcript degradation. They are also involved in RNA mediated -DNA methylation. These events result in gene repression or gene silencing.

Using root and shoots grafts of mutant and wild type Arabidopsis plant, the researchers demonstrated  that these small RNAs and small interfering RNA molecules acts as mobile signal for epigenetic modification. These not only influence the developmental pattern of plants but also their adaptive behavior to the surrounding environment and in vitro conditions.

These are infectious proteins that are capable of inducing changes in naïve proteins structure making them epigenetically modified. So these alter the cell’s and plant’s phenotype.

Prions reduce activity of certain proteins through their sequestration. In cells with PSI prion, loss of SUP35 protein causes ribosome to have a high level of read-throughf of terminator codons. The gene mainly involves in termination of translation. So it suppresses the nonsense mutations in gene and provided the plant with adaptive advantages as the cells can switch into PSI state and express dormant characteristics.

The study of epigenetic modification in plant tissue culture helps in evaluation of stability of invitro plants. These modifications in vitro conditions reflect the adaptation mechanism of plant cells to their surrounding environment. The regulation of these epigentics modifies the gene expression. Infect, the variations in chromatin states are highly abundant in nature and in vitro conditions as well that reflect phenotypic variations in plants.

These epigenetic modifications influence flowering in plants, their response to certain environmental factors, immunity and fruit ripening duration etc. So controlling these modifications and their patterns, transgenic plants with much better traits and phenotypes can be developed.

Cotton plant is important model to study and demonstrate these kinds of modifications. In cotton plant the combination of A & D progenitor genomes induces epigenetic variations; the unequal expression of homologous genes. Epigenetics that control expression of RNA’s and other signaling and transcription factors controls flowering in plant, developmental patterns, gene silencing and over expression and  cellular adaptation to the surrounding environment.

Small ribosomal RNAs have a critical role in maintaining these epigentics. In tomato plant, epigenetic modification in gene occurs. This gene basically codes for non-transposon allele for abscisic acid stress ripening. Moreover, it occurs due to DNA methylation, during water deficit state of plant.

The study of epigenetic variations and most importantly the mechanisms of variation has become a popular research topic. The purpose is to develop transgenic plants with   more stable and desired genetic makeup by controlling the gene expression and activity of certain enzymes through these epigenetic variations.