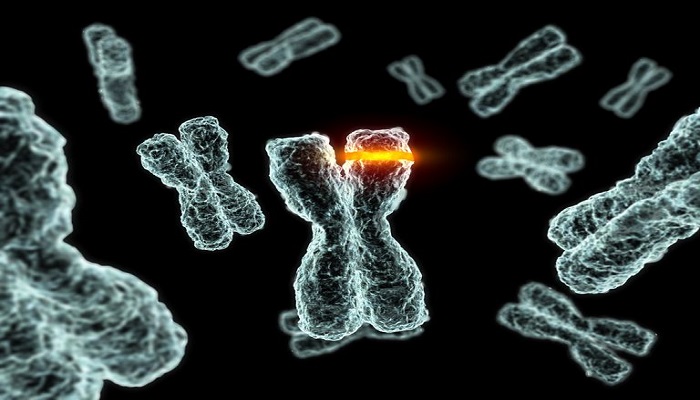 Genetic mutations are spontaneous changes occurring in the genetic material, (DNA) of an individual. Mutations can be passed to the next generations or may not, depending upon the type of cell in which they occur. They can be harmful, beneficial or even neutral. Usually these are caused naturally but they can be caused by harmful radiations or chemicals or drugs etc. Somatic cell’s mutations do not pass to the offspring. While the mutations in germ line cells are hereditary. The term mutation was given by Devries in 1909.

Two most basic categories of mutations are:

These mutations are those occurring only at certain points in chromosomes or the genes if it. For example, insertion, deletion etc.

Based upon number of chromosomes, there are further two types of mutations:

These are caused due to addition or deletion of one chromosome in genome. For example,

It is due to presence of more than two stes of haploid chromosomes. The result is deviation from the normal number of chromosomes in genome of organism.

There are various other ways to describe point mutations more briefly. For example,

So each type of mutation has its own impact or may be its neutral mutation.

1. On the basis of Structural Changes

These types of mutations are due to the structural changes in gene sequence. They are at small scale because they affect the gene structure not the chromosomal number because of changes at nucleotide level so thay are also termed as point mutations. The can be caused due to:

This is removal of one or more nucleotides causing the Frame Shift mutation. The codon and finally the amino acid sequence id disturbed. As the term suggests, this is the changes of one or more bases in the gene sequence. A single base substitution can become a base pair substitution when the DNA replicates.

It can further be classified into two types:

2. By their impact on Protein Synthesis

These are further characterized as:

This is caused either by addition or deletion of one or more nucleotides in gene sequence. The codon sequence is changed resulting in some other amino acid type in the protein structure. So the protein is altered.

Sickle cell anemia is caused by such mutation that is because of substitution of a single nucleotide that replaces the normal amino acid with some other amino acid that is not required in protein at least at that point.

Amino acids are added in protein structure as directed by the codon in mRNA sequence. This mutation occurs when substitution of nucleotide converts normal codon with the stop codon. Therefore, the ribosomes stop  protein synthesis earlier resulting in a small, nonfunctional protein.

Due to degenerative nature of amino acids, sometimes the replacement of normal codon occurs with some codon that also codes for same amino acid. So on the whole no change in protein function occurs.

In this type, the mutation alters the codon sequence but this new codon codes for the amino acid that is almost similar in function and structure to original one. So mutation appears to be neutral.

3. On the basis of effects on Cell Functioning

They can be further classified as:

These mutations are due to less or no production of a certain protein products in cell that was of vital importance for normal cell functioning. In other words, it inactivates the gene function.

This type of mutation actually “activates” the cell functions. For example, change in gene sequence that may enhance its effect or the amount of protein product for which the gene codes will be a gain of function mutation.

These express in certain conditions. For example, lactose intolerance mutation expresses itself only at milk consumption.

This is most severe form of mutation that affects the cell function in such a way that the organism may die.

4. Mutations on bases of causative agents

Some mutations occur naturally. For example, during meiosis, non disjunction of chromosome may occur. Some may occur due to some chemicals- mutagens. Moreoverm sometimes ionizing radiations cause these mutations.  Some causes of mutations are:

These agents donate their alkyl group to bases of gene sequence and cause mutation in base structure. For example, ethylmethylsulfonates (EMS) converts guanine to 6-ethylguanime.

Similarly, nitrous acid cause transition or may be transversion types of mutation.

Hydroxyl amine donates its OH group to normal base, altering its structure and causeing mutation.

During cellular metabolism, sometimes harmful oxygen radicals are produced. These may affect the structure of bases by oxidation and consequently cause mutation. For instance, oxygen radicals convert the guanine base in to 8-oxy-7,8 dihydroxyguanine by its oxidation.

Gamma rays, x-rays and the cosmic rays have the ability to damage the cell and genetic material by penetration. So they induce mutations in genome. They actually damage the double stranded DNA by breaking its hydrogen bonds. Nuclear radiations can induce worst type of mutations.

These are actually similar in structure to nucleotides so they can intercalate themselves in between the bases of DNA and distort the normal double helical structure of DNA.

“All above types of mutations that occur only at certain points in gene sequence comes under the category of point mutations.”

5. Mutations with respect to phenotypic effects

On the other hand, Phenotypic effects can be another way of classifying mutations. For example,

A type of mutation that changes the normal or wild type phenotype of organism to mutated or abnormal one.

This is a type of mutation that in beneficial for organism as it alters the mutated phenotype back to the wild type.

The mutations can be classified in diversified manners. Mutations are normally spontaneous. However the genetic engineers may introduce them in labs like in biotechnology researches, just to study their effects on cell functioning and on organism development. Also they can be helpful in some plant categories for obtaining fruits and vegetables that are better in quality and are commercially important as well. For example, seedless bananas etc. On the other hand, some may cause life threatening genetic disorders such as hemophilia and cancer.  It depends on type of mutation and the cells in which these happen.