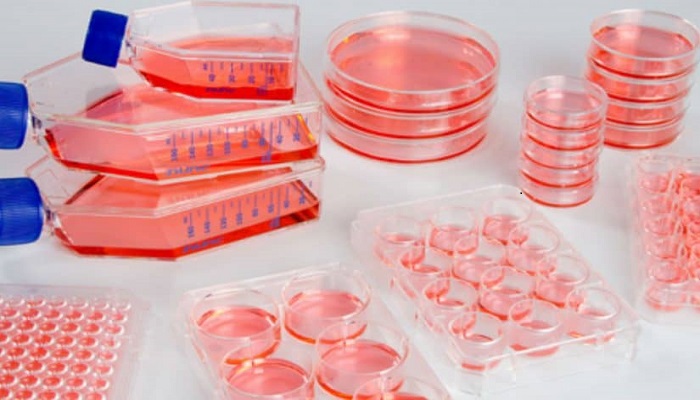 In laboratory for experimental and research purpose, the researcher grow cells under certain specific conditions. These are temperature, pH, concentration of certain gases as CO2 and O2 etc. Moreover, this require a specialized vessel that support the cell culture by providing them all the required nutrients for the growth. The cell culture now days are mainly a term use for the animal of the eukaryotic cell culture.

The cell culture technique consists of these steps:

This involves the isolation of cells from animal tissues. The cells can be obtained from blood as well as isolated from the tissue digestion. Based upon the type of cells being cultured, this method may be different. For example, for cell culture of white blood cells the cells obtained from blood are more useful.

The cells are grown in a specialized vessel that contains all essential nutrients for cell growth, optimum temperature and gas concentrations. The conditions and the growth medium may vary. Most widely used culture media are fetal bovine serum (FBS), Bovine calf serum and serum obtained from blood etc. Human platelet lysate (HPL) is another better option for cell culture media.

Scientist Claude Bernard proposed the possibility of maintaining physiological systems of the organism even after the death of organism, in a living system.

The survival of cells isolated from blood and connective tissue in plasma and serum was demonstrated by Loeb.

Observation and detailed study of in vitro cell division of salamander leucocytes.

Ross Harrison cultivated the nerve cells of frog by the hanging drop method. On these bases, some consider him as the Father of cell culture technique.

The hanging drop method is a type of wet-mount technique in which the cells of organism to be cultured are suspended in a liquid droplet. Later, this droplet is placed on microscopic slide to observe their motility and cell division.The cover slip of microscope contains some sticky substance like petroleum jelly that prevents evaporation of liquid material.

Barrows an his team extended the work of Harrison. He cultivated the chicken embryo cells using cells of plasma clots and studied the process of mitosis in cells.

Alexis Carrel performed the cell culture technique in which the cell proliferation was enhanced by using liquid media, consisting of tissue and chick embryo extract. The liquid culture media provided all essential growth nutrients and fibrin clot of plasma provided the solid attachment surface for cell for better maintenance of cell culture. The use of trypsin for degradation or isolation of cells from the animal tissue was vital in this technique.

The proteolytic enzyme trypsin was introduced by Rous and Jones. Typsin enzyme is useful as it helps in dissociation of cells from the adherent surface of vessel in which they are cultured. This technique is termed as trypsinization as this enzyme digests the proteins that are responsible for adherence of cells to the culture medium

Specialized vessel was developed by Bakers and Carrel to culture animal/ eukaryotic cells and this vessel was useful for microscopic analysis of cell culture.

The cell culture vessel consists of adherent surface for the cells that need some support surface to proliferate and a specialized media that contains all essential nutrients required for cell growth. The media is highly specific depending upon the type of culture. For example, the Dulbecco modified Eagle medium (DMEM) etc.

The vessel provided support surface and essential nutrient media to cells. The tilted opening of vessel prevents leakage of media and prevents contamination.

In fact, the researchers developed this technique for proper aeration of the cell culture in tube. The culture tubes were held in the rolling machine that would give them a turn in one hour for aeration.

Poliomyelitis virus was cultured for the first time by Weller, Robbins and Enders. The HeLa cell culture was useful as it provided a way to test certain chemicals and to observe the multiplication of viral particles in living cells of host.

Late in 1940’s the use of antibiotics, streptomycin and penicillin and the other aseptic techniques to prevent the contamination of cell culture was a great step in cell culturing technique.

So the preparation of polio vaccine and the syntactic medium for cell culture were events in animal cell culture technology. This synthetic media was either serum or fetal calf cells that consisted of all essential nutrients vitamins and other supplements to support cell culture.

Researchers developed a plaque assay of animal viruses on monolayer of cultured cells.

Abercrombie observed the phenomenon of contact inhibition; that the motility of the diploid cells ceases when they come in contact to adjacent cells.

Littlefield introduced the HAT medium for selection of cells.

The same year, Harris and Watkins experimented on fusion of human and the mouse cells, using viruses.

The Hybridoma Technique creates identical, cloned antibodies. Therefor, these antibodies are also termed as monoclonal antibodies. The organism’s body  produce the in response to some antigen injected in them.

The researchers established the basis for development of serum free media, using hormones and some other growth factors.

Human growth hormones were obtained from the recombinant bacteria. These are useful as therapeutic agent.

These Lymphoblastoidy YIFN cell lines are produced by infection of human B-cells by EBV virus. The result is immortalization of cells and these are a source of producing transformed viral particles.

Development of Plasminogen activator for (TPA) from recombinant cell at commercial level.

Recombinant erythropoietin was still in trial.

Certain recombinant products were in clinical trials. For example, CD4, Factor VIII, HIVgp120 etc. The years after 1990 are also important as the experiments for the animal cloning were going on.

In 1997, the cloning experiment for animals was successful and scientists were able to clone a transgenic sheep, dolly by nuclear transfer technique.

The research is still going on for cloning of certain genes and the whole organism. But there are certain ethical issues as well. The national institute of immunology and the center for cellular and molecular biology are from those institute that are trying their best in cloning technique to develop certain type of cells so that the mutated cells in human body can be replaced by the normal cells.

Shinya Yamanaka and his colleagues demonstrated the phenomenon of induced pluripotent stem cells (iPS). The demonstrated the possibility of reprogramming of adult mouse fibroblast cells to wards the stem cell by simultaneous induced expression of four transcription factors. These include transcription factors Oct3/4, Sox2, C-Myc and Klf4. A very important trait of human iPS was their capability to form three germ layers in tissue culture an transplantation. However, there were morphological differences between natural stem stem cells of human body and that of iPS.

In 2009, Chin and colleagues presented results of their detailed study on both human iPS cell lines and embryonic stem cells. The results revealed differences in hundreds of gene expression.

John B. Guordon awarded with the Nobel Prize in physiology and medicine for their work that proved reversible nature of cell specialization.

These discoveries are great as they may help in future oncology and regenerative medicine. These also contribute in hematopoietic disease therapies.

The coming years were of advancements in cell culture technology. One of them is 3D bioprinting technique.

While studying and experimenting the cell-cell interactions or effects of medicines or therapies on cell in vitro, the researcher have problems in mimicking the in vivo state of cell. The monolayer of cells usually cannot maintain the architecture and pattern of in vivo state.

Therefore, this 3D bioprinting developoment helped to create cell culture microenvironments similar to in vivo. This is useful and applicable  both for adherent and non adherent cell cultures. As it maintains the cell- cell interaction, their architecture, proliferation and morphological features, this technique is useful for oncological studies and cell culture studies. Moreover, this will help in much accurate results and scafflod free 3D cell culture models for