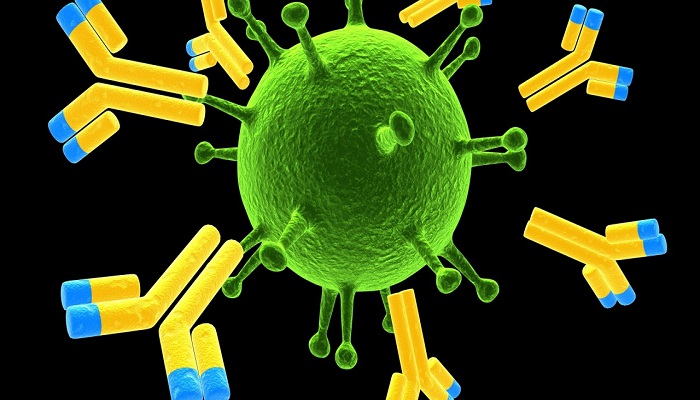 Immunoglobulins (Ig) or antibodies (Ab) are glycoprotein molecules produced by the plasma cells in response to immunogen that may be any foreign particle. These are called as immunoglobulins as they consist of globular proteins in their structure.

Each immunoglobulin molecule consists of four polypeptide chains in which two are light and the other two chains are heavy chains. In these polypeptide chains the amino terminal may have variations in their amino acid sequence so these are variable regions of antibody molecule while the remaining part is relatively constant in its amino acid sequence.

There are inter chain disulphide bonds present between heavy and light chains and also between the two heavy chains and their number varies among different classes of immunoglobulins. Also intra chain disulphide bonds are present within each polypeptide chains. The Y-shape of antibody consists of a hinge region at which the molecule shows some degree of flexibility. Oligosaccharides are bound to CH2 domain of most of antibody molecule.

Antigen Binding Fragments (Fab) of antibody are called Fab (fragment antigen binding region) that is monovalent compared to the original divalent molecule. Both the CL and VL constitute the binding site of antibody that is essential as it allows the antibody to bind to a specific antigen. Changing the VL and CL regions sequence affects the antigen binding capacity of immunoglobulins.

Fragment Constant (FC) region is the part of antibody molecule that has relatively constant amino acid sequence for the particular class of antibody.

The variable region of antibody structure further consists of these components:

The variability of amino acids resides mainly in regions of antibody structure – the hyper variable regions (HVR). Complimentarity region of antibody is its binding site and are present in both light and heavy chains of its structure. The regions in between the complimentarity parts are termed as framework regions.

Based upon the difference in amino acid sequence of constant region of antibody molecule, they are categorized into five classes.

The purpose of this secretion is to help transport of antibody and its prevention from degradation. The molecular weight of igA is 320000 Da and its conc. In serum is usually in between 1-4 mg/ml that comprise about 15% of total antibody conc. In body.

IgA1 and igA2 are two sub classes of this class. The former is synthesized in bone marrow and the later in MALT of B-cells. These antibodies are active against certain pathogenic bacteria and activate an alternative complimentary pathway of immune system activation.

The most abundant class of antibody that comprises about 80% of total immunoglobulin concentration in body. This class of antibody is also monomeric and the subclasses are based upon the hinge region and the number of disulphide bonds in structure. Total antigen binding sites are two. Molecular weight of total chains of antibody structure is approximately 150000 Da.

IgG production is the secondary or delayed response of immune system. So this type of antibodies is significant for passive immune response. The fragment constant part of antibody can enter the fetal circulation through placenta that provides protection to fetal. They require the FC receptors of IgG on surface of cells of immune system such as macrophages, natural killer cells and neutrophils so they can activate the compliment system. The IgG attachment to these cells activates the process of opsonization in which the cells of immune system engulf the pathogens or the foreign particles coated with IgG.

Mammals such as humans, rats, mice etc contain sub classes of IgG. These subclasses are:

Ishizaka discovered this class of immunoglobulins in 1966. These are located on basophils and mast cells of immune system and comprises of less than 0.1% of total immunoglobulins.

In its structure, the heavy chain contains an extra domain that assists its binding to FC region of epsilon receptors of basophils, mast cells and eosinophils. Antibodies recognize pollens, spores, dust particles as antigens.

After the bonding of antigen, these immunoglobulins signal the cells to which its receptors are attached and the result is that the cells degranulate and release allergic factors. These factors are chemicals such as leukotrienes, histamine, cytokines and heparins. Vasodilatation cause leakage of fluid form tissues that generate symptoms of allergy like cough, sneezing etc. Their purpose is to remove the allergens from body. In case of parasitic infections, the increased level of ige activates eosinophils that bind to receptors of parasitic cell surface and they cause death of parasite.

This immunoglobulin molecule is combination of five monomeric antibodies. Their constant region join together and make a petameric structure as a whole. So this is the largest antibody in size. J-chain holds all the subunits together by disulphide bond and mu chain has an extra domain in its structure. This class of antibodies constitutes about 10% of total immunoglobulins. Overall, its structure has ten binding sites for antigens so its helps in agglutination reactions. The plasma cells synthesize these immunoglobulins in response to infection. Also it is present in B-cells in monovalent form as receptor.

The surface IgM is a monomeric structure without a J chain but it contains some 20 additional amino acids at C-termini that aid anchorage to cell membrane and it contains two additional protein sequences named as Ig α and β on B-cell’s membrane. These protein chains have the role of transducing signal molecules which is because the cytoplasmic tail of B cells cannot act as transducing signal. The attachment of antigens with the IgM molecule initiates the transducing signal that activates B cells. In some cases, B cell activation requires secondary signals of T-cells.

This is present in serum and lymph and the first type of immunoglobulin to be synthesized in fetus. This antibody is more active than igg in recognition of bacterial antigens and activates opsonization to remove them but less active when it comes to viruses and toxin antigens.

These immunoglobulins are monovalent and mainly present on the surface of B cells of immune system as the receptors of certain antigens. It constitutes only 0.2% of immunoglobulin concentration in body.

Human immune system secret various types of  immunoglobulin molecules in response to antigens. Each type of immunoglobulin has specificity for antigen binding and these produce stable and lasting immune response in body against pathogens.