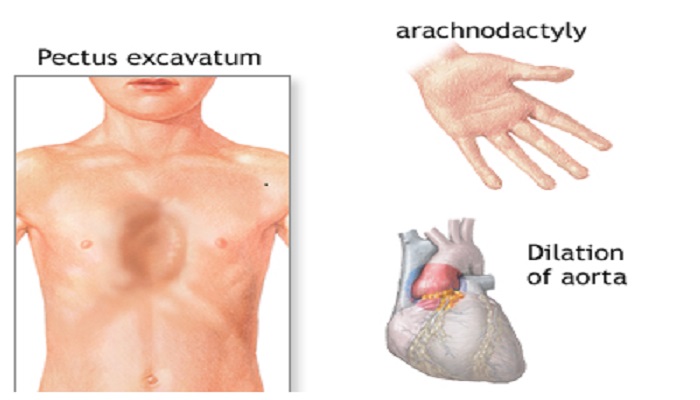 The syndrome was first identified by Antoine Marfan, a French paediatrician after observing symptoms in a girl in the year 1896. This has a prevalence of 1 person out of 5000 with equal chances to affect both genders.

The symptoms may vary from one to other patient and may affect different organs such as cardiovascular system, aortic aneurysm, ocular, pulmonary and skeletal system etc. severe complications may develop before puberty which involve retinal detachment, sight threatening glaucoma, scoliosis or dislocated lenses.

Unfortunately, most of the patients died due to acute aortic dissection or rupture. However, the average life expectancy is 32 years.

Francesco Ramirez at Mount Sinai Centre Of New York first identified the gene linked to this disorder, in 1991. This is a hereditary disorder of connective tissue. The inheritance pattern is  autosomal dominant, which means both the sex at at equal risks of disease. The phenotypic expression may vary considerably from one patient to other.

Person suffering from Marfan syndrome has low levels of elastin and fragmented elastin fibres. But the genes for elastin are not actually the major cause of this syndrome. Moreover, analysis of chromosomal map of this syndrome reveals that the Marfan and elastin loci 15q21-1 and 7q11-2  are located far away from each other.

Fibrillin 1 was firstly identified by Sakai as the major component of extracellular matrix’s microfibrils of defected tissues, in 1991.  Mutational analysis of fibrillin gene FBN1 revealed a missense mutation.

Fibrillin gene consists of 65 exons with the genomic size of 235kb. This sequence encodes a protein of 235KDa size. Mostly mutation occurs in 47th tandem repeat for epidermal growth factor, which normally codes for six cysteine residues. These cysteine molecules interact by disulphide linkage and control the calcium binding of fibrillin protein. Mutation results in increased level of proteolytic degradation of fibrillin in microfibrils that maintain the complexity of tissues. Mutation in one allele adversely effects microfibrils stability causing disease symptoms.

Researchers also suggest that it is not the mutation but the half normal production of fibrillin is the cause of Marfan syndrome. This condition is termed as haplo-insufficiency. The concept has been supported with practical evidences as well that presence of normal gene is more important rather than the overexpression of mutated one.

These include prophylactic root surgery and pharmacological therapies. Drugs and medicines provided to patient basically target aortic dissection and dilation and lower the blood pressure. This low or normal blood pressure prevents the repetitive cyclic force and pressure on heart walls to prevent heart wall’s dilation. Thus, these medicines are beneficial to reduce the risk of heart dilation but cannot overcome the actual problem that caused the syndrome.

Treatment and management of Marfan syndrome

There is no actual treatment strategy for Marfan syndrome till date. However, regular check-ups of heart valves and aorta along with  few medicines increase the life expectancy of patient. Doctors recommend medications in earlier phase of life as in adulthood to prevent heart dilation. All the treatment methods are ‘preventive’ that they slow down the rate of aortic dissection and lowering the heart beat and blood pressure.

Propranolol beta blocker, blockers of calcium channels or ACE inhibitors and angiotensin II receptor antagonists are some of drugs for patients of Marfan syndrome. These are basically to reduce the growth or aorta to prevent heart dilation. The results were promising and recent studies show that losartan can be used for similar purposes.

In April 2006, at john Hopkin medical university, researchers used perindopril drug. This drug works on mechanism of ACE inhibitors, which are used on patients suffering from Marfan syndrome. The results are promising to include reduced levels of angiotensin 2 receptors AR-2 receptors and also reduced matrix metalloproteinases that degrade elastin fibrils. Three years of study and experimental evidences on mice model suggested that ACE inhibitors based perindopril drug is better to use for Marfan syndrome and to relieve its symptoms to reasonable extent. These drugs act on cardiac muscles and prevent muscular stiffness to prevent the risks of heart dilation.

The patients are not supposed to do extraneous activity and physical tasks that may pressurize the heart wall or increase their blood pressure. a complete description of ‘can and cannot do activities’ is recommended by American heart association for such patients.

In case the aorta of heart dilates than the normal state. Surgical strategy for treatment, involves composite aortic valve grafting or aortic root replacement. This option itself is a risk to life but sometime inevitable if the aortic diameter reaches 50 mm. aortic valve replacement is better option than the valve repair. Aortic root valve replacement has two approaches and both require preimplantation of coronaries. This is also called as ‘remodelling technique’ and it maintains the hydraulic pressure on heart walls.

The patient suffers with abnormal development of skeletal system and abnormal spinal cord. The only treatment option is pain medication and muscular relaxants.

A condition, spontaneous pneumothorax, effects the pleural cavity. Sometimes this issue is resolved naturally in affected babies.  While sometimes chest surgery is performed to remove the fluid from lungs.

In pregnancy, the woman carrier of Marfan syndrome has higher risk of heart dilation. So assessment prior to conception and echocardiography are must to check heart diameter on regular bases. Preimplantation genetic testing PGT is also helpful to know if there is probability of an affected baby.

Drugs such as losartan and beta blockers help to relieve the symptoms of Marfan syndrome to some extent but still there is no particular medication that can treat this disorder. Researches are still going on to find a suitable treatment strategy for curing Marfan syndrome.

Marfan syndrome is a developmental disorder of various systems of body mainly the cardiac and pulmonary systems. aortic wall dilation is one of the reason for death of patient. Back in the history when not much medical and scientific progress was done, the average life span of the patients was less. But now there are certain options and medicines that relieve the symptoms to some extent that these has improved the life expectancy of patients. Still there is no proper cure of this disease and researchers are trying their best to find out better treatment options.