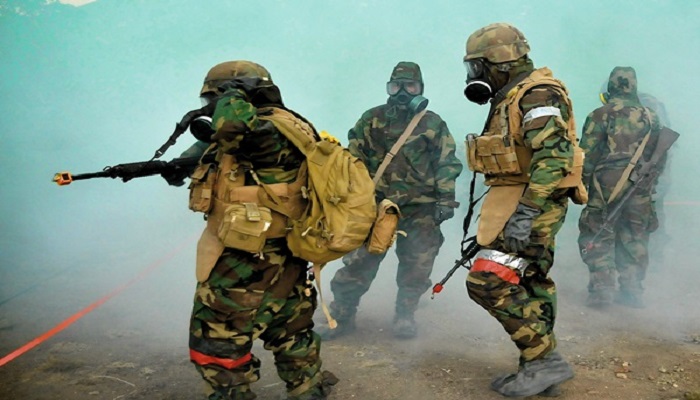 Nerve agents or nerve gases are actually the dirty dark secret of scientific development and a threat to humanity and peace of world. These are chemicals or gases which affect the central nervous system or specifically neurons. This term applies to all chemicals that affect nervous system by disrupting neurotransmitter molecules.  Gerhard Schrader accidentally formed an extremely toxic chemical in 1934 while experimenting for a pesticide and it was later termed as nerve agent- Tabun.

All the nerve agents belong to phosphorous containing organic class of compounds so they are chemically organo-phosphoric compounds. These agents can be gases, aerosols or some liquids that are either inhaled or diffused through the skin layer into the body of organism and directly affect his brain.

All the nerve agents or the nerve gases basically disrupt the normal transmission of nerve impulse through the neuron network. The block the transmission of nerve impulse by disrupting the acetylcholinesterase, an enzyme that breaks down acetylcholine- a neurotransmitter. Due to their toxic effects, these nerve agents were also used as the biological weapons.

All these nerve agents are either inhaled or can diffuse through the skin. Based on their volatility, solubility in water and structural differences, there are two series of nerve agents:

This class is named after the chemist who developed them Gerhard Schrader. This series consists of tabun, soman, sarine and cycloserine which are non-persistent and less stable. So they are degraded rapidly. These nerve agents have fruity odor and are colorless.

These nerve agents are persistent and more stable compared to the G series. These are less volatile, less soluble in water and can be lethal in a trace amount.  So they are not easy to destroy and wash away. This class of nerve agents consists of five nerve agents that are VX, VM, VE, VR and VG.

But the nerve agents block the breakdown of acetylcholine by blocking or disrupting its enzyme actelycholinesterase. They breakdown the covalent bond in the enzyme structure irreversibly so that the enzyme doesn’t remain functional. The result is that the neurotransmitter present in the synapse (can be neuro-muscular junction or neuron- gland junction)  is not removed. Due to its accumulation here, it continuously generates nerve impulse and transmit it causing the over- excitation of neurons. Consequently, neuron de-sensitization occurs.  They do not respond to any nervous stimulation further . The nerve gas or the nerve agent has the tendency to bind with the acetylcholinesterase and disrupt its structure so that it may not be able to catalyze the breakdown of acetylcholine at synapse.

Soman poisoning is more complicated and difficult to overcome even if it is present in a trace amount. The reason is that soman de-activates the enzyme through the process of aging. Thus, it becomes difficult to re-activate the enzyme for breakdown of acetylcholine. This is due to the enzyme de-alkylation and aged within minutes. So the oximes cannot reactivate this “aged” enzyme whose structure has irreversible alterations.

These nerve agents de-sensitize the muscarinic receptors of nervous system and nicotinic also. These are G –protein receptors. These help in transmission of nerve impulse when bind to acetylcholine. While the nicotinic receptors work on the principle of ligand-gated ion signaling mechanism.

The treatment of nerve gas exposure involves maintaining the amount of acetylcholine at synapse to avoid its accumulation here. Auto injectors or antidotes have significant role to overcome the deadly effects of nerve agents. Antidotes are basically injections of drugs.One can apply these immediately without doctor’s instructions  in case of biological warfare. Three main drugs for this purpose are:

This drug competes with the acetylcholine to bind to the muscarinic receptors and thus it prevents accumulation of acetylcholine. If the level of acetylcholine is high as in case of nerve gas exposure, it binds to the atropine molecules. The nerve impulse although generated due to presence of acetylcholine at synapses but not transmitted due to atropine molecules. So to overcome the effects of nerve gas, the healthcare provide continuous dosage of atropine to person. Gradually, the heart beat and the blood pressure of the patient becomes normal. This drug is harmful for the normal person as it increases the blood pressure.

This drug is useful to control convulsions. Usually 15-20 mg of this drug is require and provided through antidotes.

This drug revive the de-activated or the blocked enzyme, acetylcholinesterase and is better in some cases than atropine although it takes longer time to act. In some cases like soman poisoning, the medics use oximes with atropine for better results. Their usual dose is 20-25mg at regular intervals.

There are many other drugs or the oximes which serve as antidotes. These drugs reduce the effects of nerve agents by activating the acetylcholinesterase enzyme that breakdown acetylcholine to prevent its accumulation in synapse.

There are many security measures and precautions provided by the health ministries in case of biological warfare emergency. These prevention include use of specific masks and dresses.  The fibers prevent inhalation and diffusion of nerve agents.

The development of nerve agents was accidental.  But they had a role in both the world wars as the biological weapons and they still have. The basic nerve agents of G series were all discovered or prepared during the First World War.

The biological weapons convention (BWC) is a treaty by united nations to stop production and storage of any type of nerve agents. The review conferences are arranged in order to agree at international forum to ban these biological weapons to ensure safety and peace.