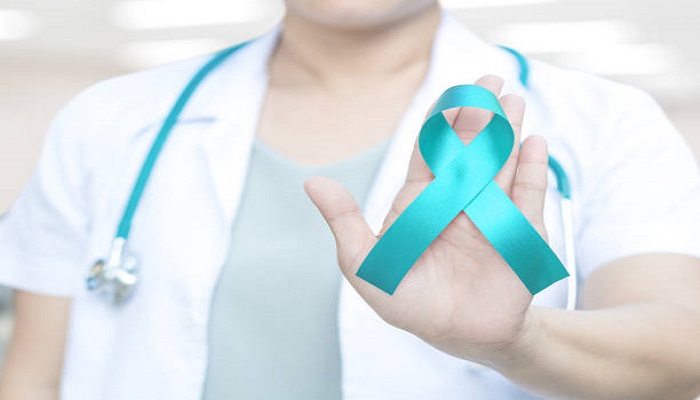 The term “ovarian cancer” includes several different types of cancer that all arise from cells of the ovary. Most commonly, tumours arise from the epithelium, or lining cells, of the ovary. These include epithelial ovarian (from the cells on the surface of the ovary), fallopian tube, and primary peritoneal (the lining inside the abdomen that coats many abdominal structures) cancer. These are all considered to be one disease process.

There is also an entity konwn as, ovarian low malignant potential tumour.  These tumours have some of the microscopic features of a cancer, but tend not to spread like typical cancers.

About 20% of ovarian cancers are detected at an early stage. When ovarian cancer is detected early at a localized stage, about 94% of patients live longer than 5 years after diagnosis. Several large studies are in progress to learn the best ways to find ovarian cancer in its earliest stage. September is ovarian cancer awareness month.

During a pelvic exam, the health care professional feels the ovaries and uterus for size, shape, and consistency. A pelvic exam can be useful because it can find some reproductive system cancers at an early stage, but most early ovarian tumours are difficult or impossible for even the most skilled examiner to feel. Pelvic exams may, however, help identify other cancers or gynaecologic conditions. Women should discuss the need for these exams with their doctor.

The Pap test is effective in early detection of cervical cancer, but it isn’t a test for ovarian cancer. Rarely, pap tests detect the ovarian cancer, when at advanced stage.

Early cancers of the ovaries often cause no symptoms. Moreover, these symptoms usually seem common to other mild infections. These symptoms include abdominal swelling or bloating (due to a mass or a build-up of fluid), pelvic pressure or abdominal pain, difficulty eating or feeling full quickly, and/or urinary symptoms (having to go urgently or often).

By the time ovarian cancer is diagnosed,  it usually has already spread beyond the ovaries. Also, some types of ovarian cancer can rapidly spread to the surface of nearby organs. Still, prompt attention to symptoms may improve the odds of early diagnosis and successful treatment. If you have symptoms similar to those of ovarian cancer,  report them to your health care professional — preferably a gynaecologist — right away.

Screening tests and exams are used to detect a disease, like cancer.  Perhaps the best example of this is the mammogram, which can often detect breast cancer in its earliest stage, even before a doctor can feel the cancer.

There has been a lot of research to develop a screening test for ovarian cancer, but there hasn’t been much success so far. The 2 tests used most often to screen for ovarian cancer are transvaginal ultrasound (TVUS) and the CA-125 blood test.

TVUS is a test that uses sound waves to look at the uterus, fallopian tubes, and ovaries by putting an ultrasound wand into the vagina. It can help find a mass (tumour) in the ovary, but it can’t actually tell if a mass is cancer or benign. When used for screening, most of the masses are not cancerous.

CA-125 is a protein in the blood. In many women with ovarian cancer, levels of CA-125 are high. This test can be useful as a tumour marker to help guide treatment in women known to have ovarian cancer, because a high level often goes down if treatment is working.

In studies of women at average risk of ovarian cancer, using TVUS and CA-125 for screening led to more testing and sometimes more surgeries, but did not lower the number of deaths caused by these type of cancer. For that reason, no major medical or professional organization recommends the routine use of TVUS or the CA-125 blood test to screen for ovarian cancer.

Better ways to screen for ovarian cancer are still a research area . Hopefully, improvements in screening tests will eventually lead to a lower the death rate. Researchers continue to look for new tests to help diagnose ovarian cancer early.

After biopsy, chemotherapy is performed to get rid of any remaining cancerous cells in body. Sometimes, chemotherapeutic drugs are injected into abdomen.

Medicine not only  kill cancerous cells but also inhibit their spread to surrounding cells. Medicine’s rout can be oral or by injection in abdomen.

Sometimes, hormone-blocking therapy is most common for treating ovarian stromal tumours. However, this is not much preferred in case of epithelial ovarian cancers.

The particular treatment option for ovarian cancer depends on age of the patient an clinical trials and testing help to determine the most suitable option to ensure complete removal of cancerous cells.