The B cells of adapted immune system produces antibodies or immunoglobin molecules in response to foreign antigens. The emergence of recombinant DNA technology in 1970’s has led to the production of ‘engineered or recombinant’ antibodies (rAbs). Initially researchers tried their best for production of humanized antibodies and fragmentation of these Abs and it resulted in production of second and third generation antibodies.

Antibody is a Y-shape molecule, consisting of light and two heavy chains. The upper part is variable region and also the antigen binding site while the lower part is constant region and depicts particular class of antibodies. Each immunoglobin or antibody molecule is highly specific for the type of antigen to which they bind. The expression of certain immunoglobin genes results in antibodies development. These genes also control antibody specificity and affinity for antigen. 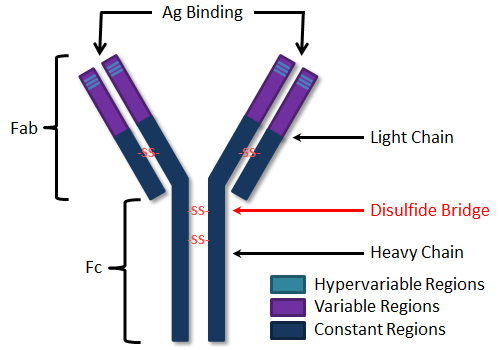 Researchers develop recombinant antibodies in labs by various techniques. There are three types of libraries that either store immunized B cells or the genes that codes for antibodies. These are immune libraries, naïve libraries and phage display libraries.

Immunization of mammalian cells such as mice and later B cell are isolation form immune library. This immunization creates high immune response against the antigen and through this researchers achieve affinity maturation of immunoglobin genes.

However, developing immune response in humans is a problem  as humans cannot be manipulated like lab animals.  This kind of immunization and antibody production by humans is ethically wrong. Therefore, researchers develop immune libraries with most closely related mammalian species such as mice. 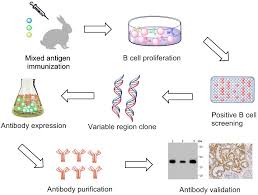 There is no need of immunization for this kind of libraries. These are large libraries based on isolated B cells from human body. Therefore, these libraries generate a large variety of recombinant antibody molecules for broad range of antigens.

But one major problem is that lack of immunization results in absence of affinity maturation of the immunoglobin genes. So, resulting recombinant antibodies have low antigenic affinity.

This type of antibody library applies less of immune system but more use of creative engineering. Wide variety of recombinant antibodies can be generated by random cloning and combination of various immunoglobin genes.

One major advantage about these libraries is that the lesser use of human immune system make them self-targeting. So, this kind of immunoglobin molecules are useful for treatment of cancer.

Once antibody library is generated, the immunoglobin gene’s information can be utilized for production of antibodies.

There are two methods for antibody production:

The purpose of chimeric antibodies is to reduce the antigenicity of murine based antibodies. These type of recombinant antibodies use two strategies:

Resulting recombinant chimeric antibodies were better than murine based Abs because of low antigenic nature. Winter and colleagues performed further experiments for grafting of loops of VH and VL domain’s framework region. These were taged as as humanized antibodies and the process was humanization. In murine Abs, the CDR region has framework sequence. The researchers  successfully replaced the CDR region with human gene sequence in humanized antibodies.

US Food and Drug Administration has approved the first therapeutic Ab in 1986. OKT3 is monoclonal humanized antibody. It prevents the kidney transplant rejection.

Single chain fragment ScFv is one of them. Fv is used for constructing  VL and VH domains whcih link together by disulphide bridges. A linker Gly4Ser3 stabilizes this interaction preventing any loss of Ab affinity for its antigen. Chelating recombinant antobodies CRAbs fragments have even high antigen affinity. These are derivatives of ScFv which applies short linker sequence of ten amino acids for structural stabilization.

Bispecific recombinant antibodies bind to multiple receptors. Their advantages are more tissue penetration, short timing of retention and low antigenicity. For example, TNF alpha and interleukin-6 mutations are responsible for cancer and inflammatory diseases. So, bispecific antibodies are ideal to use for therapeutic purposes in such cases. IgG like tetravalent diabodies and IgG.ScFv fusion proteins are examples of them.

These fusion proteins have therapeutic applications such as hepatocarcinoma, and tumour etc. In addition, these can be used for phage display technique for detection of various toxins. Replacing the CDR3 region of ScFv fragment with some fluorescent protein, make it applicable for therapeutic and diagnostic purposes.

Smallest Ab fragment till now is 3kDa fragment. It contains one CDR from each of heavy and light chains and framework region. Separating CDRs regions by framework sequence conserve the parental conformation of Ab. This is how recombinant antibodies conserve 1-10% of antigenic affinity.

One of the limitations of this type of Ab engineering is the lack of Fc domain. The result is low Fc-mediated recycling of Ab that results in reduced half-life period.

Quadromas are conjugate antibody molecule from two species. Milstein described the method of quadroma production in 1983. These are also termed as hybrid hybridoma as its production applies two different hybridoma cell lines. There are chances that mispaired antibody fragments may attach together to form a non-functional IgG antibody. However, selection is possible for one with better affinity. There are approximately 12.5% chances of therapeutically useful bispecific antibody production.

As the name suggests, these immunoglobin molecules are specific for multiple antigens. Using various techniques of recombinant biotechnology, may develop tri, tetra, pentavalent antibodies. These will serve for therapeutic purposes.

US department of Food and Drug administration has approved recombinant monoclonal Bevacezumab or AVASTIN antibody that can treat colorectal, breast cancer and lung cancer. AVASTIN is a recombinant humanized antibody. It binds to vascular epithelial growth factor and inhibit its activity. This consists of humanized framework and CDR region of murine origin. This antibody prevents vascular endothelial growth factor and its receptors interactions on surface of endothilail cells. the result is inhibition of  growth and proliferation of endothilail cells. In mice, this treatment provided promising results.  But there are certain side effects of this drug antibody such as gastrointestinal haemorrhage. So, its improvement is required to be used for cancer treatment.