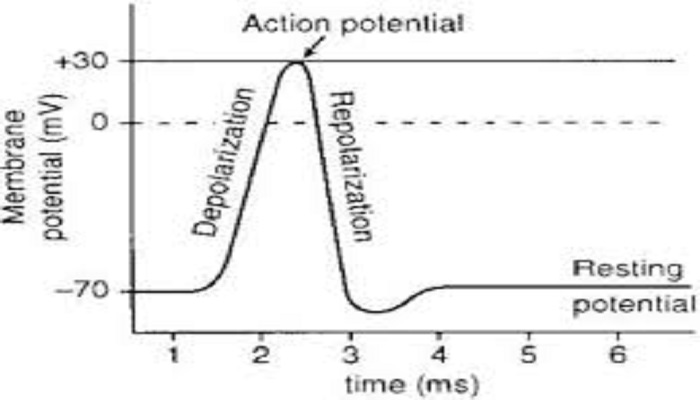 The potential of neuron, generated in its resting state, when there is no conduction of nerve impulse through it, is termed as resting membrane potential.

On average its value is -70mV that is because the inside of neuron has less K+ ions compared to higher concentration of Na+ ions outside it and thus it makes the inside potential negative (less positive) than outside it.

Resting membrane potential is same for all neurons or not?

In my opinion, the RMP of all type of neuron should be the same. The reason is that the resting membrane potential is developed due to permeability of ions across the neuron membrane. In a resting neuron no nerve impulse is generated which is the same condition for all type of neurons.

But according to the book Neuroendocrinology In Physiology And Medicine (Edited By P. Micheal Conn & Marc E. Freeman) Page # 531, the studies reveal that the resting membrane potential of all neurons is not necessarily the same and even it may not be constant in the same neuron. The studies show that when the neuron is at rest (not conducting the nerve impulse), it is more permeable for K+ ions that the other ions and this increased permeability of resting membrane for K+ ions can change the RMP. The studies based upon the hypothalamic and the endocrinal neuron show that the resting membrane potential can vary within the range of -50mv to -85mv depending upon the type of cell and the neuron.

The membrane potential is a function of relative permeability towards ions like sodium and potassium ions. In contrast with the K+ ions, the changes in concentrations of Na+, Cl – and Ca++ ions has a negligible effect on potential of a resting membrane.

Similar reason for difference in resting membrane potential is better described in Handbook Of Pediatric Neuropsychology By Andrew S. Davis Page 91, which states that the membrane of neurons is permeable to ions like Na+, Ca++ and K+ as well  that these ions can be leaked from the neuron when in resting stage.

This leakage of ions directly affects the membrane potential and it can be more negative than -70MV. Permeability of neuron membrane for ions can be affected due to some medical conditions.

For example, Hypokalemia is a condition of low potassium level in serum or in extracellular fluid. This will enhance the diffusion of K+ ions from the resting neuron towards outside. This increased diffusion force will increase the voltage or the electrical force. This force develops due to movement of ions across the neuron membrane. Greater the diffusion of ions more negativity in RMP will be achieved.   The leakage of K + will shift its equilibrium constant in such a way that the RMP will be -90mV. This is of course more negative than -70mv.

Hyperkalemia is the other state that happens because of the high potassium levels in extracellular fluid. This will make the resting membrane potential somewhat positive from -70 to -60mV.

Here are some values of RMP of different types of cells: