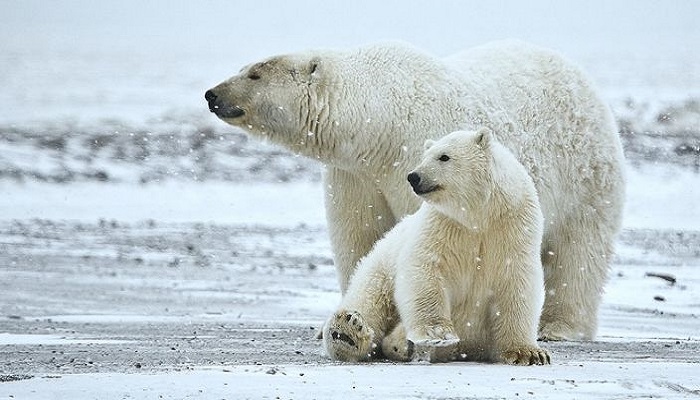 In birds and mammals which are homeothermic endotherms, there body temperature is regulated closely by homeostatic mechanisms. These mechanisms regulate loss of heat and heat production. Thus, they maintain constant body temperature, independent that of temperature of environment.

In endotherms, the core temperatures are reserved constant between 37°C-38°C in mammals and 40°C for birds. On the other hand, temperature for peripheral tissues and of extremes are less constant. Sometimes these may reach temperature of environment. Homeotherms heat production in basal is different for a given size. This high metabolism in basal, in combination with heat dissipating and heat conserving mechanism allows maintenance of body temperature to be constant in homeotherms which is 30°C or above normal temperatures.

Mechanisms of temperature regulation in endotherms

Endotherms use wide variety of both behavioral and physiological mechanisms to conserve their body temperature within a thin range. The mechanisms are explained after before that thermal neutral zone concept should be explained.

By increasing the temperature of environment the extremes also increases due to which the maintenance of core temperature becomes difficult and it increases with it. At reasonable temperature, the loss of heat to the environment is maintained by the heat production by the basal.

In thermal neutral zone the endotherm does not need to spend energy to maintain body temperature. Regulation happens by adjustments in rate of heat loss. This happens by altering thermal conductance through body surface. Temperature area can move because they have the capability to insulate. The adjustments occur by:

In endotherms, heat conductance from the surface of body occurs via blood flow from skin.The Vasomotor control of peripheral arterioles pushes the arterial blood away or towards the skin.  The blood vessels of peripheral areas vasoconstrict in cold, pushing blood away from endotherm surface. Similarly, in high temperature, the blood rushes to skin, where equilibrium approaches with the environment.

It can indicate postural changes where change in its body moves or shape occur. Thus exposing diverse areas of body to the shade or sun and by convection,conduction and radiation and heat exchange occurs.

This adjustment done by loweringor raisingfeathersorhairs. Due to which the feathers or fur are fluffed. The muscles in skin then trap the motionless air at the top of skin. Similar;y, the humans have goosebumps in which the hair follicles cause the hairs to be erect. This traps the air.

Temperature fluctuations should be in range..

Below LCT the heat production has to be increased to balance the heat lost by thermogenesis which produces heat. If the temperature in environment falls drastically then the rate of metabolism decreases and body cools down, many of animals can tolerate such situations in their rest time. But if the temperature of body falls down the normal value then animal enter in hypothermia state. If this state progresses this will cool down the body a lot and the metabolism becomes very slow thus causing death of an animal. In both of these processes conversion from chemical energy to heat done through normal mechanism of metabolism that produces heat. Basically all energy released is in the form of heat than mechanical or chemical form.

The rapid contraction of muscle liberate heat. Insects and endothermic vertebrates have this shivering thermogenesis. The nervous system activates the antagonistic muscles. Hydrolysis of ATP occurs due to activation of this muscles.Moreover, this releases energy.  The energy released which is chemical energy during contraction basically is heat.

Certain enzymes activate the metabolism of fats. This results in oxidation and heat generation. The  amount of energy released is used for the synthesis of ATP.

Mammals use Brown Adipose Tissue (BAT) to use fats as a fuel and for thermogenesis. These are present in shoulders and neck in small deposits. BAT also has role in heat production.

Brown fat has extensive vascularization and mitochondria that gives it a brown color due to cytochrome oxidase. Oxidation occurs inside fat cells, which have abundant metabolizing systems of fat.

Sympathetic nervous system activate non-shivering thermogenesis of fat by the release of norepinephrine, which helps in binding to receptor present on tissue of adipose cells. By help of second messenger mechanism, the signal lead it to thermogenesis by means of two mechanisms. First mechanism, caused by sympathetic signal which uses ATP for its processes in cellular part of fat cells by increased production of heat.

In second mechanism, production of ATP is uncoupled during oxidation of respiratory chain. The ATP formation from ADP and Pi is coupled by movement of  H+ down electrochemical gradient. Thermogenesis of brown fat is categorized through its appearance in inner mitochondrial membrane. The membrane gives a path to protons so that they can leak across membrane without energy and later these join for ADP phosphorylation to form ATP. When inside mitochondria, substrate oxidation occur through protons using oxygen for production of heat and water.

In thermogenesis brown fat considerably maintains heat . This heat then quickly spread to other body parts via blood flow over the brown fat tissue. In the stimulation of hibernating non-shivering thermogenesis is obvious. Thus, shivering enables quick warming. Increase in amount of brown fat protect the mammals from cold and divert it to non-shivering thermogenesis. Brown fat is present in infants, in  neck region ,chest, spine and shoulders. Infants are comparatively inactive and small at birth. Therefore, brown fat deposits offer quick way of warming infant in cold. Other heat production specialized tissues are at bill fishes eye muscles. These tissues have huge capability to generate the heat such as 250 Watt. Those heater cells which does not have sarcomeres and myofibrils they produce the heat by releasing Ca2+ from cytoplasm. The ions of Ca2+ released then excite the respiration and process of catabolism. Endothermy is a detailed study. The endotherms organisms behavior varies according to the environmental temperature. Some strategies help them cope with these fluctuations. How do endotherms maintain and deal with the cold or hot environment is another point of discussion, which will we cover in our next article.