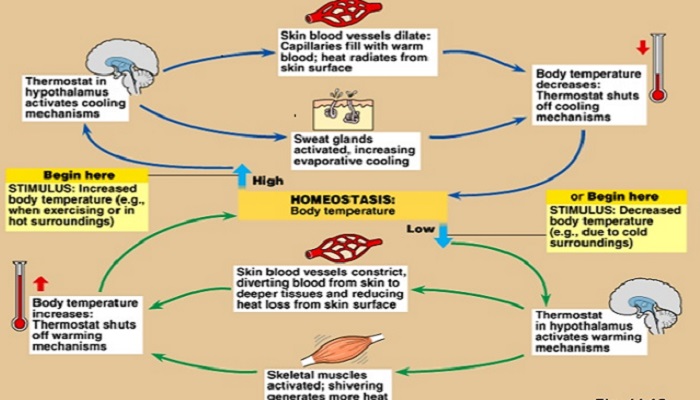 Endotherms regulate and maintain their internal body temperature within a homeostatic range. This phenomenon is termed as thermoregulation. These mechanisms vary according to the requirements. For instance, these are either for heat production or heat loss to maintain the internal body temperature of the organisms. How endotherms behave and what basic strategies they adapt for thermoregulation  in cold and hot temperature is covered in this article.

Thermoregulation of endotherms in cold temperature

The endotherm organisms prevent excessive heat loss either by fluffing the fur or fearther or moving to some warm place. These all are for short term temperature regulation. But for the long term regulations, endotherms go for heat generation by metabolism. Also, they have insulating fat layer called as blubber.

The specific conductance of homeotherms vary and decrease with body size of organism. Larger animals have lower specific heat conductance which is because of  their thick body coats like fur and feathers. Also,  they have to face smaller heat loss during the cold climates because of smaller surface areas. So the increase in body size is adaptation for thermoregulation in  cold environment.

An exception for the small animals is that they have less conductance per unit thickness. For e.g, blubber which is a fatty layer present beneath the skin layer  acts as an insulator. This is because, blubber has a lower thermal conductivity like that of air. Moreover, this layer is the basic constituent of non-fatty tissues.

Another method to control of heat loss is the to diverge the  blood flow towards  or away from the skin. Vasoconstriction of arterioles leading to the skin prevents the heat loss from the body core.

Similarly,  the greater  blood flow into the blubber will cause the lower the effective thickness of the insulating layer. This ability of organism (with this blubber layer)  to regulate heat transfer allows them to prevent the loss of excessive body heat.

The well vascularized limbs are one of the major parts of the body for the heat loss because of their thinness & the larger surface area. Counter current heat exchange mechanism prevents the excessive heat loss that occurs form these appendages.

This mechanism is based upon the fact that the arterial blood, that is generated in the animal’s body core is relatively  warm and the venous blood that returns from the peripheral tissues is relatively cold. As blood flows from the core towards the periphery, it enters the arteries of the limbs that are present next to veins that carry the deoxygenated blood returning from the body parts to the heart. Thermoregulation in Endotherms in hot temperatures

Animals with insulating fat layers have the advantage of low heat absorption from the external hot climate. For example, camel can endure high temperatures of desert during day time. Also, less heat is lost form the body at night when the temperature of the climate is low.

So the large body mass has a role of a heat buffer both by reducing rates of absorption of heat and its loss in regulation of extreme temperature fluctuations. For example, a dehydrated camel can also withstand or tolerate the elevation of its core body temperature to several degrees, by further increasing its heat-absorbing capacity. Large amounts of heat accumulates gradually during daytime. One the other hand, heat is lost or dissipated from the body in the cold night. This also prepares the animals such as camel to maintain a temperate of body before the next day when it is again high. Thus, prevents over-heating of body. All these mechanism or activity of temperature maintenance is termed as limited heterothermy. The same case happens in ground squirrel.

Because of its lesser body mass, the squirrel is unable to absorb heat for several hours in the hot sunny day. Therefore, this desert squirrel exposes itself to high temperatures of outside environment for only about 8 minutes. It then returns to its burrow, where its stored heat is dissipates into the cool underground. All this activity prevents the overheating. For example in rabbit, that has furred ear with interconnected network of arteries and veins. Similarly,  the horns, legs and snouts of can act as thermal regulator by dissipation heat of body in high temperatures.

Some mammals living in climate of intense solar ray’s exposure or high temperatures have some specific body areas. These areas are either lightly furred or even naked to allow  the excessive heat loss by radiation etc. Some of the organs are axilla (armpit), groin, scrotum,and other  parts of the ventral side of body. Some of these areas have additional  temperature sensors. These are in scrotum and in armpit and detect changes in air temperature for thermoregulation.

Variations in position and the specific orientation of body also, can affect the rate of heat absorbance or its loss from the body of organism. For example, the guanaco and  camel like animals have very dense hair on its back. On the other hand,  a relatively lighter covering of fur on its head,neck region and at the outer surface of its legs. The inner sides of the upper thighs and the underside acts as the thermal windows that maintain the temperature of body by heat loss.

This is one of the basic and significant mechanism of thermoregulation in hot temperature climate. It is the mechanism or the process of loss of water vapors form the surface of body that also cools the body. Evaporation of one gram of water requires about 2448 kcal of energy. Birds and mammals like dogs take available body water(e.gsaliva and their urine)from the environment and spread it on the surface of their body. This moisture content, later evaporates from the body by consuming the heat energy of body. Animals with naturally moist skin, e.g,amphibians, usually  have their body temperature lower than ambient temperature. This is because of evaporative cooling.

During sweating, in some mammals, sweat glands in the skin remove and excrete the water vapors actively. Also, some salts for the sweat  pores onto the surface of the skin. The autonomic nervous system controls the whole process. Unlike evaporation sweating can happen even when the air humidity is high. It also acts as osmoregulatory mechanism to some extent.

In panting, mammals and birds use the respiratory system to lose heat by evaporative cooling mechanism. The organism breath by mouth rather than form nose. During the process, excess heat dissipates form the body. As the cold air passes into the lungs, it carries the body heat with it. Mammals are able to hyperventilate. This increases heat loss by change in alveolar ventilation.  However, this results in a change in blood CO2 and blood pH value. So the evaporation process is not only significant for the temperature maintenance but also for the body’s electrolytic balance. Water balance  of the body  and the evaporative cooling have cross-link. The small animals will die if it uses too much water for cooling mechanism. So, they have to drink water to survive.

Example is the kangaroo rat that uses counter current heat-exchange mechanism. This mechanism cools the nasal epithelium during inspiration of air for breathing.

During exhalation, most of the moisture present in the air is conserved. However, this mechanism also recycles body heat to some extent. Moreover, it requires that the air being inhaled should be at lower temperature level  than the body temperature. So, the kangaroo rat mostly remain confined to its cool burrow when the outside’s environmental temperature is high. If inhaled air is at or above the ambient  body temperature, the loss of respiratory moisture will increase. Therefore, the temperature maintenance and the osmoregulation share close links together.