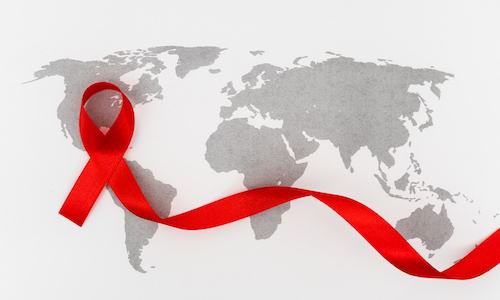 HIV/AIDS is a deadly contagious disease in humans.  HIV refers to Human Immune Deficiency Virus. This HIV virus causes Acquired Immune Deficiency Syndrome AIDS in humans which is in fact the last stage of viral infection. The patients’ immune system gets weak and unable to fight the infections and pathogens. Consequently, the person dies due to multiple fatal infections.

The Center of Disease Control and prevention (CDC) identified this disease in 1981. Since then mortality rate due to HIV/AIDS is on rise becoming a global threat to human health. One of the reason for its high prevalence is its contagious nature that the viral infection transmits to others. Things and actions which transmit HIV are sexual contact, from mother to newborn baby, blood transfusion, using contaminated syringes and surgical equipment. The incidences are even high in developing countries due to poor and unhygienic living conditions and lack of public awareness. 1st December is the global HIV/AIDS day to create awareness in people and to show solidarity with those affected with this disease. 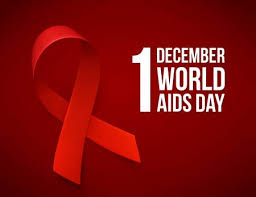 In this article we will cover the top countries with highest incidence rate of HIV/AIDS infection.

According to UN programmed on HIV/AIDS (UNAIDS), the reports suggest that estimated 37 million people were diagnosed with HIV/AIDS in year 2014. 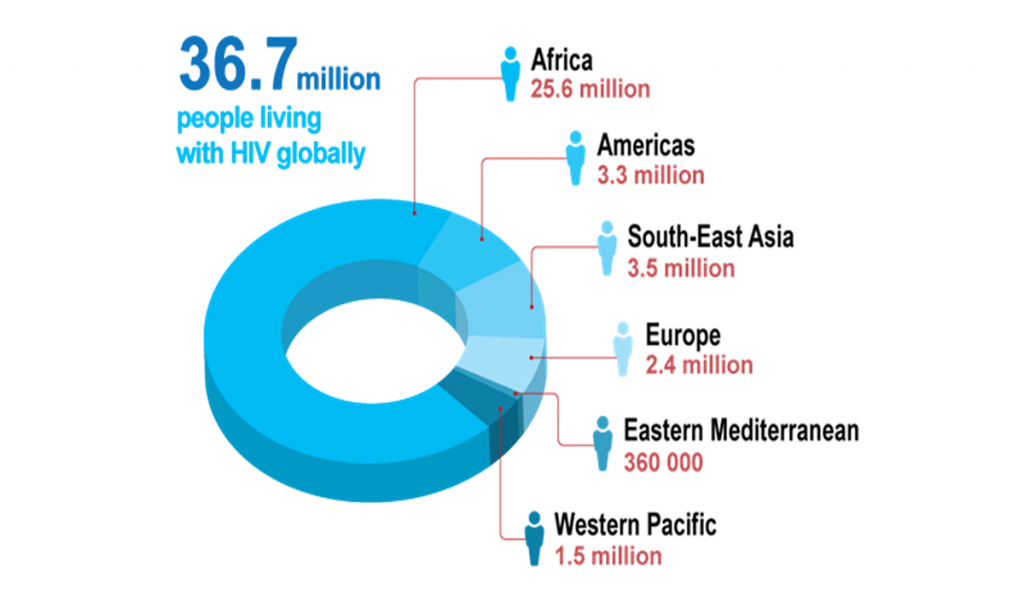 The statistics show that approximately 36.9 million people were having HIV in year 2017. Moreover , out of these 36.9 million affected persons, 1.8 million were young teenagers and children of less than 15 years age. Globally, about 0.8% of young adults are living with HIV. In about 75% of cases, people knew that they are HIV positive. On the other hand, 9.4 million people did not even know that they carry the infection. Such cases transmit infection to others as well. Data reported by world health organization WHO, one in every 25 adults in Africa is affected with HIV. This cases account for two third of the young HIV patients worldwide. The mortality rate was 940,000 people annually by the year 2017.

This country is presently at top of the list with 5,600, 000 patients of HIV. And it has estimated population of 53 million people. According to some reports including UNAIDS, HIV/AIDS is one of the leading cause of physical disability and death in South Africa.

India has approximately 1.339 billion populations. With as estimated 2,400,000 HIV positive cases, India is also one of the top countries with HIV/AIDS infection.

According to reports 0f year 2017, Kenya has approximately 49.7 million populations. Kenya is also in top list countries with high morbidity and mortality rate of HIV positive case. The number of infected people is 1,500,000 approximately.

Mozambique has approximately 5 million populations. ‘The lancet’ studies declared HIV as leading cause of death in year 2015. Studies suggest that 280 out of 100,000 people died of HIV in year 2015.

Located at eastern coast of Africa, Tanzania has approximate 50 million populations. HIV/AIDS in Tanzania is fourth leading cause of disability and death as well. Latest data reports of year 2017 revealed about 1,400,000 persons were diagnosed with HIV/AIDS in Tanzania.

Uganda is also one top of the list country with 1,500,000 cases of HIV/AIDS according to reports by UNAIDS.

According to reports of UNAIDS of year 2017, United States is also one of the top countries with high incidence rate of HIV. The number of affected person was estimated to be approximately 1,200,000.

The latest data repost 1,200,000 HIV positive cases in Zimbabwe. Data reported by institute of health metrics and evaluation reveal that 318 people out of every 100,000 people in Zimbabwe died of HIV in year 2010. This number increased to 520 people out of 100,000 in year 2013 making it one of the leading causes of death.

Some other countries with alarming number of HIV positive cases and high mortality rate due to AIDS are:

The statistics of HIV/AIDS prevalence are no doubt alarming. HIV is a challenge and a curse to society which needs to be dealt with iron hands. The health care organizations must take steps to create awareness in people to prevent this deadly infection. hopefully, in near future the researchers will succeed in finding a suitable treatment option to cure HIV/AIDS.