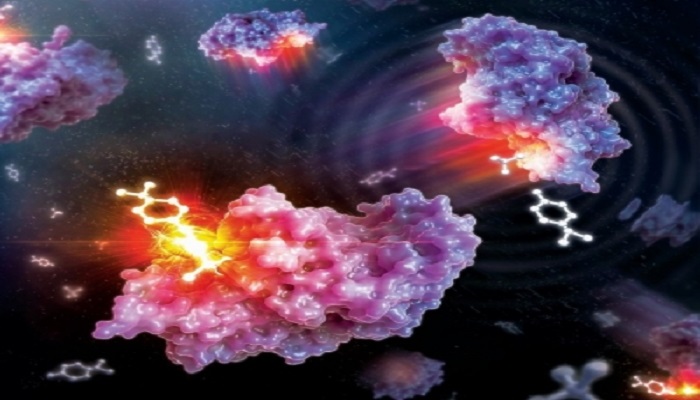 The rate of chemical reaction is enhanced by the enzymatic action on substrate molecule, a process named as enzyme catalysis.

Enzyme catalysis is vital for certain biochemical reactions in cells as without the enzymatic actions the original rate of reaction is too low. Enzymes reduced the activation energy of reaction so that more molecules are able to cross that barrier and participate in reactions.

The mechanism is based upon the fact that the enzymes provide an alternative pathway for the reaction to precede. This pathway actually provides less activation energy barrier for the substrate molecules so that more molecules take part in reaction and thus the rate of reaction increases.

Firstly the substrate binds with the enzyme’s active site and forms a transition state of enzyme-substrate complex. This ES complex is at high energy state that converts into enzyme- product complex and it readily breaks into product and the original enzyme molecule.

Certain environmental factors may influence the enzyme catalysis. For example, the presence or absence of certain molecules or cofactors in the reaction mixture.

There are further two categories:

The mechanism based upon the transition state theory are:

Method based on transition state theory

This mechanism is also referred to as Entropy Reduction Mechanism. Proximity of reaction means that the bound molecules substrate and the enzymes do not require collision as both of them are already bound together. The orientation of the molecules refers to their position in bound state.

Both of these parameters help in catalysis of reaction and enhance the rate of reaction. In enzyme-substrate complex, the reactive molecules are held together in close proximity. Furthermore, their proper direction facilitates the reaction catalysis by reducing the entropy of the reaction. Example of such reaction is reaction of p-nitrophenyl acetate.

This mechanism states that the binding of substrate with the enzyme, removes water molecule from the enzyme’s active site that lowers the dielectric constant of reaction. So it increases the electrostatic interactions of ES complex for better enzyme catalysis reactions.  The removal of water also helpful as it does not produce unwanted biproducts. The example is action of carboxypeptidase A enzyme.

The residues in the active site of enzyme that form ionic bonds can also stabilize the transition state. These residues are because of the acidic or basic side chains of charged amino acids in enzyme structure. Infect, these residues provide more stability and electrostatic interactions than those created by removal of water molecule. These create a dipole state for better electrostatic association in ES complex. The magnitude of this electrostatic field directly associated with the enzyme catalysis.

This mechanism is also termed as strain & distortion mechanism of enzyme catalysis because it is supposed that the binding of substrate with the enzyme “distort” its structure in such a way that changes its ∆G. the reaction proceed forward just to achieve a favorable energy state that is provided by the product formation.

Overall the binding of enzyme with the transition state happens at the cost of some of reaction energy. Moreover, the binding is possible only after the conformational changes of both molecules so that both become complimentary to each other.

For example the mechanism of action of hexokinase enzyme in which the glucose binding induces the conformational changes in enzyme active site. The changes increase the overall rate of reaction.

Acids donate proton and the bases accept protons. The phenomena can be utilized by the enzymes catalysis as both of them can stabilize the transition state charges. Histidine amino acid is basic in nature and is usually participates in such reaction by changing the pKa values of reaction and its participant molecules. The pKa changes affect the electrostatic state of ES complex.

Hydrolysis of esters, breaking the peptide bonds addition of carbonyl groups and reactions that involve phosphate groups are based on the acid base mechanism of enzyme catalysis. The involvement of acids and base prevent the instable charged intermediates to effect the reaction.

Functional groups such as histidine imidazole, carboxyl, amino, thiol groups etc can act as acid/ base either by donating proton or accepting it. The pH and pKa influence the protonization of these groups to enhance the rate of enzyme catalysis.

In acid catalyzed reactions, the transfer of proton lowers the free energy of transition state of reaction as in keto-enol tautomerization. Proton accepted by the base also enhances the rate of reaction.  Some of the reactions involve both of them simultaneously as in concentrated acid base enzyme catalysis.

The active site of enzyme contains some metal ions as its co-factors which also stabilize the -ve charges. On the other hand, they themselves have +ve charges. Also these metal ions can take part in catalysis reaction as agents of redox reactions. Ions like Cu++ and Zn++ stabilize the transition state by binding to this charged intermediate. The example of such reactions is action of carboxypeptidase that requires metal ions as cofactor and the reaction of carbonic anhydrase enzyme. The restriction endonuclease enzyme BamHl also uses the same mechanism.

The metal ions have the ability to enhance the acidity of the water molecule associated with the ES complex by polarizing the H-O bond. This increases the nucleophilic character of water.

This mechanism is based on formation of a transient covalent bond with residues of enzyme molecule. So an additional intermediate id formed during the reaction that further reduces the activation energy. Examples of such reactions are proteases in which the intermediate is acyl-enzyme complex. The alternative way is formation of Schiff base in enzymatic reactions of aldolase that uses free amine group from lysine or pyridine residues. The example is decarboxylation of acetate.

“The covalent catalysis machismo involves the formation of acyl-enzyme complex as the reaction intermediate to reduce the activation energy.”

Thymidine pyrophosphate enzyme use non-amino cofactors for covalent intermediate formation. But the rate of these reactions is less compared to those having an amino acid cofactor. Examples of such reactions are action of pyruvate dehydrogenase enzyme. Overall this covalent intermediate formation provides even low activation energy barrier than the normal catalysis mechanisms.

One other way is the introduction of a new step in reaction that further lowers the activation energy. For this, a nucleophile acts as catalyst that forms covalent intermediate with the reactants.

The mechanism of formation of Schiff base provides an electronic sink for reactions that involve beta keto acids (decarboxylation reactions). The nucleophile used in this reaction either the positively charged N-terminal or the carbonyl group.  While the electrons are provided by some source such as carboxyl group.