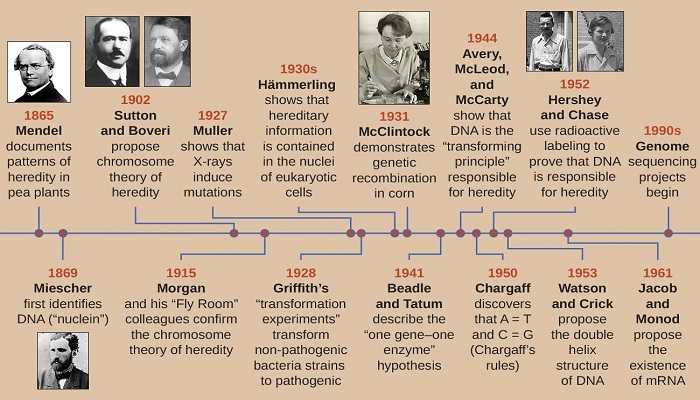 The study of inheritance of traits from organism to its offspring and the way these traits are inherited is termed as genetics. It includes study of hereditary matter DNA, its genes and also the variations in genetic material of the organisms.

The concept of evolution and the natural selection of species as proposed by Darwin and Wallace was the very initial step toward genetics although they did not provided any clue about inheritance of such traits.

During the same period Gregor Mendel also worked on pea plant. His work depicted the inheritance of various traits to offspring. Also the fact that the nature selects the organism with better traits. Mendel was the one who presented the laws of independent assortment and law of segregation of alleles of traits. Initially, he named them as “unit factors” Unfortunately, Mendel’s work remained unrecognized for about 30 years.

Then, after a series of experimental evidences, Mendel’s contribution for genetics was recognized. On basis of these contributions, Mendel is honored as “Father of Genetics.”

History of developmental advances in field of genetics

The contributions of various scientists with in development and improvement are as follow:

Mendel proposed his work on inheritance of traits (by example of pea plant) as a paper in Brunn Society of Natural History.

His paper was then published by the society’s proceedings. Unfortunately, his work could not get attention of other scientists at that time.

The work of Mendel was again done by three other scientists Tschermak, DeVries & Correns.

The scientists demonstrated the presence of homologous chromosomes in cells using dye, to color these bodies. At that time, these were supposed to be the factors of hereditary as described by Mendel. Scientists W.Sutton and T.Boveri contributed their efforts for this task.

In this year, Bateson provided these studies a title, Genetics.

The same year, the genetists discovered that the homologous chromosomes have same sizes and shape except the last pair- that determine the sex ( x-y chromosome).

Presentation of Hardey-wienberg law to explain the gene frequencies of a population of randomly mating members.

A book named as “Inborn error of Metabolism” was published by Garrod.

Thomos H.Morgan demonstrated that the inheritance of white eye trait (mutated type) was related to X chromosome inheritance in Drosophila fly. And it was supposed applicable for all diploid organisms.

Morgan observed and worked on chromosomal basis of inheritance.

X-rays were capable of producing mutations; Mullar demonstrated this idea.

Crieghton and Stern presented the idea ”that genetic recombination were possible by exchange of gene marker. Furthermore, they demonstrated the concept in maize and Drosophila.

Avery, Mecloed and McCarty collectively presented and demonstrated the principles of transformation of genetic material –DNA.

Martha chase and Harshy demonstrated that the genetic material in bacteriophage is actually DNA not the proteins.

Watson and Crick presented the double helical structure of DNA by means of X-ray diffraction technique of Wilkinson. Also, it based on the composition data as presented by E.Chargaff.

The same year, Benzer published a paper “the fine structure of gene”.

Levan presented that the normal human genome consists of 46 chromosomes.

Franklen and Sange observed and analyzed the storage of genetic information of tobacco mosaic virus in RNA.

Meselson and Stahl proved that the DNA replication actually happens in semi-conservative manner.

Jacob presented the Operon model for regulation of gene expression.

Temin and colleague Baltimore discovered the enzyme for gene cloning and the reverse transcriptase enzyme.

Maxam Gilbert and Sanger presented the methods of gene sequencing.

Merck introduced the vaccine for human Papillomavirus HPV. The vaccine proved effective against HPV 16 and 18 infection. both infections by HPV affects the tumor suppressor genes and cause cervical cancer in 70% cases.

Michael Worobey analyzed and traced the evolutionary origin of human immune deficiency virus HIV. The analysis if genetic mutations in viral genome revealed its occurrence in early 1960s in US.

The genetists developed first gene therapy based Houston based introgen Advexin. The food and drug FDA has not approved this yet. However, this is to curing Li-Fraumeni syndrome. Moreover, this utilizes adenovirus as vector to carry the replacement gene of natural tumor suppressor gene p53.

This is year 2019; the genetics have evolved into genetic engineering and recombinant DNA technology. The research and advancement are achieving new millstones. Take the examples of CRISPR technique, cell culture, hematopoietic stem cell therapy, genome editing, and nanotechnology. Genomic, proteomics and bioinformatics are also developing fields that are related to genetics. All this aim to serve humanity by providing better therapeutics for disease treatment, improving crop production and by improving and resolving the environmental issues to serve the humanity and to make this world a better place to live in.

6 thoughts on “History of genetics”