Staphylococcus are spherical, gram positive bacteria that belongs to family styphylococcaceae and genus staphylococcus. This family consists of more than twenty species out of which two are common, namely staphylococcus aureus, S. epidermidis or S. albus and S.saprophyticus.

Staphylococci are round cells of 1 µm diameter that grow in grape-like clusters and the colonies appear white on enriched blood agar and haemolytic on agar. These are facultative anaerobes in nature. The temperature range for their growth is 15*C to 45*C and salt tolerant to a limited limit of 15%.  S.aureus is potentially pathogenic for humans as it expresses certain surface protein to colonize the host cells and other factors that prevents its phagocytosis.

Under normal circumstances, staphylococcus aureus is commensal bacterial species for humans as it resides on skin, nose and rarely in throat and gastrointestinal track of humans. It becomes pathogenic when crosses a threshold limit and in cases of infections and wounds or when the immune system is weak enough to allow its attack on host.

Penicillin- the very first antibiotic was developed by Alexander Fleming in 1928. Selmen Waksman suggested the term ‘antibiotic’ as the chemicals having the ability to inhibit pathogens growth and kill them. Penicillin was isolated form culture of fungal specie penicillium notatum. Since middle of twentieth century, several antibiotics have been developed and used frequently to combat bacterial infection.

A wide range of antibiotics has been developed since penicillin was discovered in 1928 and usually they are found effective against pathogenic bacterial strains. But many of these pathogenic strains such as those from genus staphylococcus have been found resistant toward many antibiotics. In other words, they show multidrug resistance which is why they pose a greater health risk than others.

How S.aureus counter the antimicrobial agent?

S.aureus strain produces penicillinase enzyme. So initially, penicillin was effective against it. However, it has acquired multidrug resistance towards many commonly used antibiotics such as methicillin, oxacillin, vancomycin, tetracycline, chloramphenicol any some others. Such multidrug resistant strains are one of the major causes of nosocomial infections. 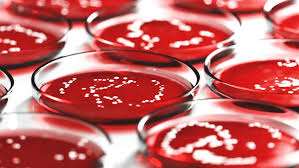 vancomycin resistance in microbes links to presence of MecA gene. Horizontal gene transfer of this gene along with transposons elements containing vanA genes provides the strain with antibiotics resistance. Staphylococcic cassette chromosome SCC is transposable genetic element whose presence and transfer to other cells provides them with resistant genes.

Role of plasmids in antimicrobial resistance

Usually the bacterial plasmid is carrying the genes that provide resistance to organism. These are extra-chromosomal circular genomic material that are self-replicating are infectious as well. Transfer of plasmids among members of same species or to other species is the key source of genomic changes that provide resistance to organism. Molecular biologist Joshua Lederberg identifies plasmids for the first time in 1952 and named them as extra chromosomal hereditary determinant.

The PSK1 family of plasmids

The PSK1 family of plasmid also consists of some transposons elements that also code for some resistance genes. Overall the plasmid has low copy number but contains genes against most of the antibiotic drugs. Moreover, these genes readily transfer to other strains via conjugation. Evolution and genomic rearrangement events in these plasmids suggest these main cause of multidrug resistance in S.aureus species.

They also posses genes against beta lactamase. Evolutionary analysis reveal that there are six different genes for its replication and stability. Studies suggest that these genes provide greater stability and transmission capability to plasmid and eventually enhance the survival of multidrug resistant staphylococcus aureus.

Antimicrobial resistance occurs when an organism becomes insensitive to drugs that normally inhibit its growth and pathogenic activities. 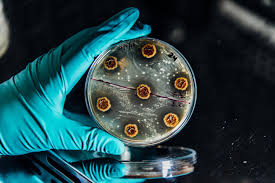 Two potent third generation drugs are methiciilin and vancomycin. Methiciilin was potent inhibitor of S.aureus until 1961 when its use for human infection was limited.  Studies reveal that S.aureus show resistance to these two also. This is giving rise to nosocomial infection of S.aureus and these strains are tagged as methicillin resistant staphylococcus aureus MRSA an vancomycin resistant S.aureus as VISA. 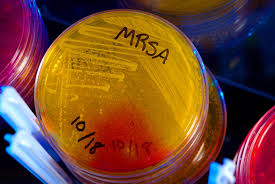 Staphylococcus aureus is an emerging multidrug resistant organism. The microbe itself is highly infectious and pathogenic and last thing we need is its multidrug resistance. Not only this, many other gram negative microbes are also becoming resistant to many antimicrobial agents. This is the need of hour to create awareness in people and heath care provides to limit the misuse of antibiotics.